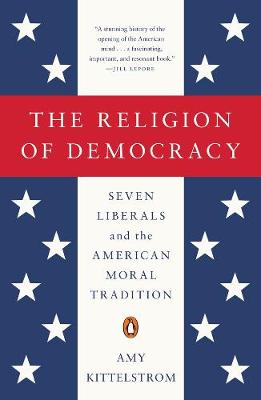 The Religion Of Democracy

Description - The Religion Of Democracy by Amy Kittelstrom

Today we associate liberal thought and politics with secularism. When we argue over whether the nation's founders meant to keep religion out of politics, the godless side is said to be liberal. But the role of religion in American politics has always been far less simplistic than today's debates would suggest. In The Religion of Democracy, historian Amy Kittelstrom shows how religion and democracy have worked together as universal ideals in American culture-and as guides to moral action and to the social practice of treating one another as equals who deserve to be free.

The first people in the world to call themselves "liberals" were New England Christians in the early republic. Inspired by their religious belief in a God-given freedom of conscience, these Americans enthusiastically embraced the democratic values of equality and liberty, giving shape to the liberal tradition that would remain central to our politics and our way of life. The Religion of Democracy re-creates the liberal conversation from the eighteenth century to the twentieth by tracing the lived connections among seven transformative thinkers through what they read and wrote, where they went, whom they knew, and howthey expressed their opinions-from John Adams to William James to Jane Addams; from Boston to Chicago to Berkeley. Sweeping and ambitious, The Religion of Democracy is a lively narrative of quintessentially American ideas as they were forged, debated, and remade across our history.

Other Editions - The Religion Of Democracy by Amy Kittelstrom Book Reviews - The Religion Of Democracy by Amy Kittelstrom

» Have you read this book? We'd like to know what you think about it - write a review about Religion Of Democracy book by Amy Kittelstrom and you'll earn 50c in Boomerang Bucks loyalty dollars (you must be a Boomerang Books Account Holder - it's free to sign up and there are great benefits!)

Amy Kittelstrom is a scholar of modern thought and culture who lives and works in the North Bay Area of California. She currently serves on the editorial board of the "Journal of American History" and is an associate professor at Sonoma State University. Her research has been supported by fellowships from the Center for Religion and American Life at Yale, the Charles Warren Center for the Study of American History at Harvard, and the Center for the Study of Religion at Princeton. Her next book will put the twentieth-century writer James Baldwin in deep historical context.

A Preview for this title is currently not available.
More Books By Amy Kittelstrom
View All