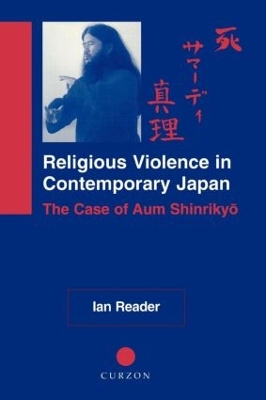 The Case of Aum Shinrikyo

The Tokyo subway attack in March 1995 was just one of a series of criminal activities including murder, kidnapping, extortion, and the illegal manufacture of arms and drugs carried out by the Japanese new religious movement Aum Shinrikyo, under the guidance of its leader Asahara Shoko. Reader looks at Aum's claims about itself and asks, why did a religious movement ostensibly focussed on yoga, meditation, asceticism and the pursuit of enlightenment become involved in violent activities? Reader discusses Aum's spiritual roots, placing it in the context of contemporary Japanese religious patterns, and discussing Asahara's teaching as it developed between his earliest public pronouncements in the 1980s through to his sermons at the time of the attack, and at some of the statements he has made in court during his trial. He examines Aum's stance as a millennialist movement, originally claiming a mission to save the world, but later becoming increasingly involved with drastic prophecies of disaster.
In discussing how Aum not only manufactured nerve gases but constructed its own internal doctrinal justifications for using them Reader focuses on the formation of what made all this possible: Aum's internal thought-world, and on how this was developed. His conclusion suggests that, despite the horrors of this particular case, Aum should not be seen as unique, nor as solely a political or criminal terror group. Rather it can best be analysed within the context of religious violence, as an extreme example of a religious movement that has created friction with the wider world that escalated into violence.

Other Editions - Religious Violence in Contemporary Japan by Ian Reader » Have you read this book? We'd like to know what you think about it - write a review about Religious Violence in Contemporary Japan book by Ian Reader and you'll earn 50c in Boomerang Bucks loyalty dollars (you must be a Boomerang Books Account Holder - it's free to sign up and there are great benefits!)


A Preview for this title is currently not available.
More Books By Ian Reader
View All