This revised edition is fully updated and continues to provide the best in-depth introduction to renewable energy science. It focuses mainly on renewable energy, but also addresses nonrenewable energy (fossil fuels and nuclear technology). The coverage extends from the basic physics to conservation, economic, and public policy issues, with strong emphasis on explaining how things work in practice. The authors avoid technical jargon and advanced math, but address fundamental analytical skills with wide application, including: 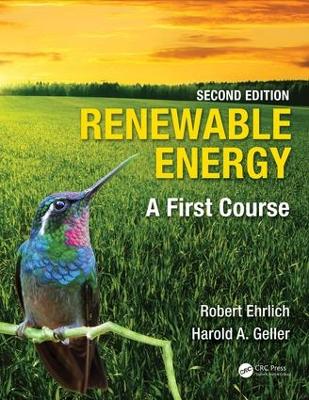 » Have you read this book? We'd like to know what you think about it - write a review about Renewable Energy, Second Edition book by Robert Ehrlich and you'll earn 50c in Boomerang Bucks loyalty dollars (you must be a Boomerang Books Account Holder - it's free to sign up and there are great benefits!)

Robert Ehrlich is a professor of physics emeritus at George Mason University. He earned his BS in physics from Brooklyn College and his PhD from Columbia University. He is a fellow of the American Physical Society. He formerly chaired the physics departments at George Mason University and SUNY New Paltz and has taught physics for nearly four decades. Dr. Ehrlich is an elementary particle physicist and has worked in a -number of other areas as well. He has authored or edited 20 books and about 100 journal articles. His current scholarly interests include -renewable energy and the existence of faster-than-light particles. Harold A. Geller is an associate professor of physics and astronomy at George Mason University. He earned his BS from the University of the State of New York, Albany; his MA in astronomy and informatics; and his doctorate in education from George Mason University. Dr. Geller has been teaching physics and astronomy for over a quarter century. He has been the Associate Chair of the Department of Physics and Astronomy; manager of Washington Operations for the Consortium for International Earth Science Information Networks; program manager at Science Applications International Corporation; and, doctoral fellow of the State Council of Higher Education for Virginia. He has authored or edited 7 books, and has published about 85 papers in education, astrobiology, astrophysics, and biochemistry. His current scholarly interests include energy and the environment; the search for life in the universe; and the exploration of space.

A Preview for this title is currently not available.
More Books By Robert Ehrlich
View All

Eight Preposterous Propositions
No Stock on Hand, Supplier Has No Due Date for Supply.
$76.49 $84.99