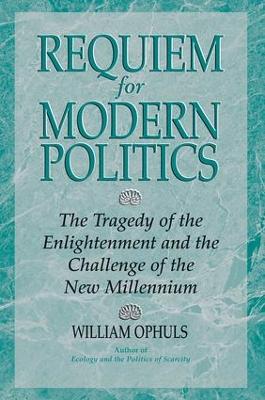 This long-promised sequel to Ophuls' influential and controversial classic Ecology and the Politics of Scarcity is an equally provocative critique of the liberal philosophy of government. Ophuls contends that the modern political paradigm, that is, the body of political concepts and beliefs bequeathed to us by the Enlightenment, is no longer intellectually tenable or practically viable. Our attempt to live individualistically, hedonistically, and rationally has failed utterly, causing a comprehensive crisis that is at once political, military, economic, ecological, ethical, psychological, and spiritual. Liberal politics has abandoned virtue, rejected community, and flouted nature, thereby becoming the author of its own demise. By exposing the intrinsically contradictory and self-destructive character of Hobbesian political systems, Ophuls subverts our conventional wisdom at every turn. Indeed, his impassioned text reads more like a Greek tragedy than like a conventional political argument. He critiques feminism, multiculturalism, the welfare state, and a host of other liberal" shibboleths, but Ophuls is not another reactionary neoconservative. The aim of his thesis is far more radical and progressive, offering a political vision that entirely transcends the categories of liberal thought. His is a Thoreauvian vision of a politics of consciousness" rooted in ecology as the moral and intellectual basis for governance in the twenty-first century. Ophuls holds that a polity based on a renewed erotic connection with nature offers a genuine solution to this crisis of contemporary civilization and only within such a polity will it be possible to fulfil the worthy liberal goal of individual self-development. Ophuls' work will interest and challenge a wide spectrum of readers, though it will not necessarily be well liked or easily accepted. No one will put down this book with his or her settled convictions about Western culture intact, nor will readers ever again take modern civilization and its survival for granted.

Other Editions - Requiem For Modern Politics by William Ophuls 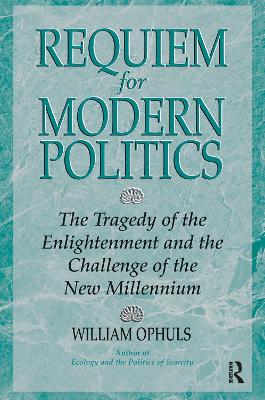 » Have you read this book? We'd like to know what you think about it - write a review about Requiem For Modern Politics book by William Ophuls and you'll earn 50c in Boomerang Bucks loyalty dollars (you must be a Boomerang Books Account Holder - it's free to sign up and there are great benefits!)

William Ophuls is a former member of the U.S. Foreign Service and has taught political science at Northwestern University. He is the author of Ecology and the Politics of Scarcity, which won the International Studies Association's Sprout Prize and the American Political Science Association's Kammerer Award.

A Preview for this title is currently not available.
More Books By William Ophuls
View All

Requiem For Modern Politics: The Tragedy Of The Enlightenment And The Challenge Of The New Millennium
$226.80 $252.00