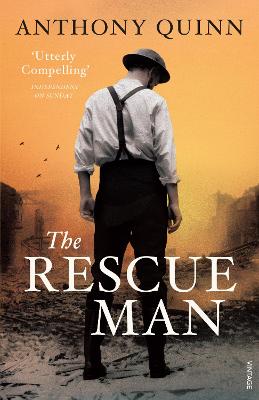 In a Liverpool torn apart by the Second World War, the 'Rescue Man' takes to saving the wounded from bombed buildings. But can he stop his own life from unravelling?

Liverpool, 1939. Lonely historian Tom Baines is at work on a study of the city's architectural past but the ominous news from Europe, together with his burgeoning friendship with Richard, a young photographer, and his beautiful wife, Bella, are proving a distraction.

When the bombings begin, Tom joins up as 'rescue man', retrieving the wounded and dying from the ruins of buildings, but the love affair he embarks on soon leads him into a very different kind of danger.

» Have you read this book? We'd like to know what you think about it - write a review about Rescue Man book by Anthony Quinn and you'll earn 50c in Boomerang Bucks loyalty dollars (you must be a Boomerang Books Account Holder - it's free to sign up and there are great benefits!)

Anthony Quinn was born in Liverpool in 1964. Since moving to London in 1986 he has written about film and books for a number of newspapers and magazines, including The Independent, Daily Telegraph, New York Times and Mail on Sunday. For three years he was the arts editor at Harpers & Queens. Since 1998 he has been film critic of The Independent. In 2006 he was one of the judges of the Man Booker Prize. He is currently wine correspondent for Esquire magazine.

A Preview for this title is currently not available.
More Books By Anthony Quinn
View All