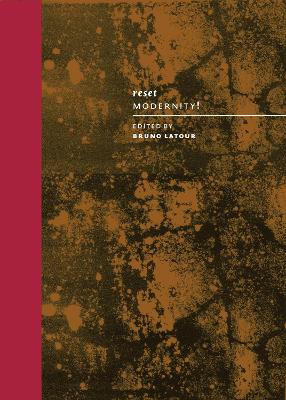 Texts and images document the disconnection between modernity and ecological crisis- do we need to reset modernity's operating system?Modernity has had so many meanings and tries to combine so many contradictory sets of attitudes and values that it has become impossible to use it to define the future. It has ended up crashing like an overloaded computer. Hence the idea is that modernity might need a sort of reset. Not a clean break, not a "tabula rasa," not another iconoclastic gesture, but rather a restart of the complicated programs that have been accumulated, over the course of history, in what is often called the "modernist project." This operation has become all the more urgent now that the ecological mutation is forcing us to reorient ourselves toward an experience of the material world for which we don't seem to have good recording devices.
Reset Modernity! is organized around six procedures that might induce the readers to reset some of those instruments. Once this reset has been completed, readers might be better prepared for a series of new encounters with other cultures. After having been thrown into the modernist maelstrom, those cultures have difficulties that are just as grave as ours in orienting themselves within the notion of modernity. It is not impossible that the course of those encounters might be altered after modernizers have reset their own way of recording their experience of the world.
At the intersection of art, philosophy, and anthropology, Reset Modernity! has assembled close to sixty authors, most of whom have participated, in one way or another, in the Inquiry into Modes of Existence initiated by Bruno Latour. Together they try to see whether such a reset and such encounters have any practicality. Much like the two exhibitions Iconoclash and Making Things Public, this book documents and completes what could be called a "thought exhibition-" Reset Modernity! held at ZKM | Center for Art and Media Karlsruhe from April to August 2016. Like the two others, this book, generously illustrated, includes contributions, excerpts, and works from many authors and artists.
Contributors
Jamie Allen, Terence Blake, Johannes Bruder, Dipesh Chakrabarty, Philip Conway, Michael Cuntz, Eduardo Viveiros de Castro, Didier Debaise, Gerard de Vries, Philippe Descola, Vinciane Despret, Jean-Michel Frodon, Martin Giraudeau, Sylvain Gouraud, Lesley Green, Martin Guinard-Terrin, Clive Hamilton, Graham Harman, Antoine Hennion, Andres Jaque, Pablo Jensen, Bruno Karsenti, Sara Keel, Oleg Kharkhordin, Joseph Leo Koerner, Eduardo Kohn, Bruno Latour, Christophe Leclercq, Vincent-Antonin Lepinay, James Lovelock, Patrice Maniglier, Claudia Mareis, Claude Marzotto, Kyle McGee, Lorenza Mondada, Pierre Montebello, Stephen Muecke, Cyril Neyrat, Cormac O'Keeffe, Hans Ulrich Obrist, P3G, John Palmesino, Nicolas Prignot, Donato Ricci, Ann-Sofi R nnskog, Maia Sambonet, Henning Schmidgen, Isabelle Stengers, Hanna Svensson, Thomas Thwaites, Nynke van Schepen, Consuelo Vasquez, Peter Weibel, Richard White, Aline Wiame, Jan Zalasiewicz
Exhibition
April 10, 2016-August 21, 2016
ZKM | Center for Art and Media Karlsruhe
Edited by Bruno Latour with Christophe Leclerc
Copublished with ZKM | Center for Art and Media, Karlsruhe

» Have you read this book? We'd like to know what you think about it - write a review about Reset Modernity! book by Bruno Latour and you'll earn 50c in Boomerang Bucks loyalty dollars (you must be a Boomerang Books Account Holder - it's free to sign up and there are great benefits!)

Bruno Latour, a philosopher and anthropologist, is the author of Reassembling the Social: An Introduction to Actor-Network Theory, Our Modern Cult of the Factish Gods, An Inquiry into Modes of Existence, and many other books. He curated the ZKM exhibits ICONOCLASH and Making Things Public and coedited the accompanying catalogs, both published by the MIT Press.

A Preview for this title is currently not available.
More Books By Bruno Latour
View All