India's cities are in the midst of an unprecedented urban expansion. While India is acknowledged as a rising power, poised to emerge into the front rank of global economies, the pace and scale of its urbanisation calls for more effective metropolitan management if that growth is not to be constrained by gathering urban crisis.

This book addresses some key issues of governance and management for India's principal urban areas of Mumbai, Kolkata and Hyderabad. As three of the greatest Indian cities, they have evolved in recent decades into large metropolitan regions with complex, overlapping and often haphazard governance arrangements. All three cities exemplify the challenges of urbanisation and serve here as case studies to explore the five dimensions of urban governance in terms of devolution, planning, structures of delivery, urban leadership and civic participation. London, with its recent establishment of a directly elected Mayor, provides a reference point for this analysis, and signifies the extent to which urban leadership has moved to the top of the urban governance agenda. In arguing the case for reform of metropolitan governance, the book demonstrates that it would be too simplistic to imagine that London's institutional structure can be readily transposed on to the very different political and cultural fabric of India's urban life.

Confronting India's urban crisis with a comparative analysis that identifies the limits of policy transfer, the book will be particularly valuable to students and scholars of Politics, Governance, and Urban studies. 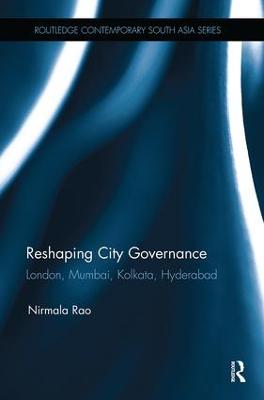 » Have you read this book? We'd like to know what you think about it - write a review about Reshaping City Governance book by Nirmala Rao and you'll earn 50c in Boomerang Bucks loyalty dollars (you must be a Boomerang Books Account Holder - it's free to sign up and there are great benefits!)

Nirmala Rao is Professor of Politics and Pro-Director at SOAS, University of London, UK. She has published extensively in the field of urban governance and her other publications include Cities in Transition: Growth and Change in Six Metropolitan Areas (Routledge) and Governing London (with Ben Pimlott).

A Preview for this title is currently not available.
More Books By Nirmala Rao
View All