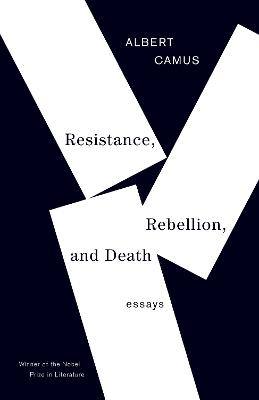 In the speech he gave upon accepting the Nobel Prize for Literature in 1957, Albert Camus said that a writer "cannot serve today those who make history; he must serve those who are subject to it." And in these twenty-three political essays, he demonstrates his commitment to history's victims, from the fallen maquis of the French Resistance to the casualties of the Cold War.

Resistance, Rebellion and Death displays Camus' rigorous moral intelligence addressing issues that range from colonial warfare in Algeria to the social cancer of capital punishment. But this stirring book is above all a reflection on the problem of freedom, and, as such, belongs in the same tradition as the works that gave Camus his reputation as the conscience of our century: The Stranger, The Rebel, and The Myth of Sisyphus.

» Have you read this book? We'd like to know what you think about it - write a review about Resistance, Rebellion & Death book by Albert Camus and you'll earn 50c in Boomerang Bucks loyalty dollars (you must be a Boomerang Books Account Holder - it's free to sign up and there are great benefits!)

Born in Algeria in 1913, Albert Camus published The Stranger--now one of the most widely read novels of this century--in 1942. Celebrated in intellectual circles, Camus was awarded the Nobel Prize for Literature in 1957. On January 4, 1960, he was killed in a car accident.

A Preview for this title is currently not available.
More Books By Albert Camus
View All