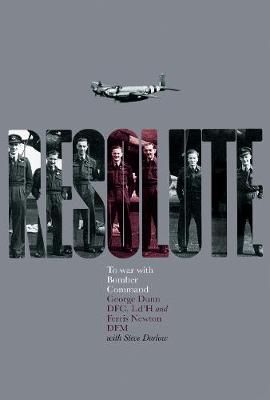 Resolute: To War with Bomber Command

Description - Resolute: To War with Bomber Command by George Dunn

The Second World War biography of Bomber Command pilot George Dunn DFC L d'H and flight engineer Ferris Newton DFM. Bomber Command pilot George Dunn DFC L d'H completed forty-four operations during the Second World War. George flew his first tour in 1943, on Handley Page Halifax bombers, during one of the most intense periods of the bombing war. Following two trips as a second pilot with No. 10 Squadron, to gain operational experience, George, accompanied by his usual flight engineer Ferris Newton DFM, then flew with No. 76 Squadron crew from May to October 1943, taking part in the Battle of the Ruhr, the Battle of Hamburg and the raid against the German secret weapon research station at Peenemunde. On completion of his tour, and a period as an instructor pilot, George then took up duties flying de Havilland Mosquitos, firstly with No. 608 Squadron and then with No. 1409 Met Flight. In Resolute, the title being the No. 76 Squadron motto, George and Ferris describe in detail their journey from novice airmen, through training, to crewing up and operational duties. It was a time at which the attrition rates in the air battle over Germany were escalating and the odds were against completing a full tour. Despite the pressures of operations George, Ferris and the crew find time to enjoy life to the full! In the latter stages of the war, George then recalls with fondness and admiration, the opportunity to fly Mosquitos. Resolute is based on the detailed diary that Ferris kept during the war, and on accounts written by George, along with recorded interviews. Author Steve Darlow, with his extensive knowledge of the Bomber Command story, provides the context in which George, Ferris, and their crew went to war. Illustrated with photographs, and images from George's logbook, Resolute tells the gripping story of one crew's fight for survival, and their contribution to the eventual defeat of Nazism. AUTHOR: George Dunn DFC L d'H served with RAF Bomber Command as a pilot during the Second World War. Ferris Newton DFM served with RAF Bomber Command as a flight engineer during the Second World War. Steve Darlow is an author, with over twenty books to his name, and documentary contributor and consultant, specialising in the Royal Air Force during the Second World. 16pp b/w photographs

» Have you read this book? We'd like to know what you think about it - write a review about Resolute: To War with Bomber Command book by George Dunn and you'll earn 50c in Boomerang Bucks loyalty dollars (you must be a Boomerang Books Account Holder - it's free to sign up and there are great benefits!)


A Preview for this title is currently not available.
More Books By George Dunn
View All