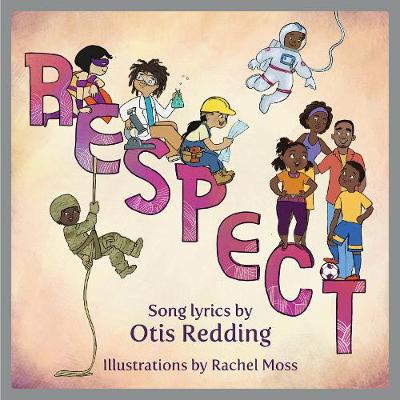 Respect is a children's picture book based on lyrics written and originally recorded by Otis Redding in 1965. Aretha Franklin's iconic rendition of the song later peaked at #1 on Billboard's Hot 100 in 1967. Redding's lyrics continue to resonate with listeners today.

With lyrics by Otis Redding and illustrations by Rachel Moss, this irresistible book shows a young girl, her brother, and her parents conjuring as many positive futures for each other as they can dream. Packed with playful vignettes as they imagine a life full of possibility, Respect provides families an opportunity to explore themes of mutual respect--while revisiting one of the greatest songs ever written.

The Otis Redding Foundation. Redding was dedicated to improving the quality of life for his community through the education and empowerment of its youth. He provided scholarships and summer music programs which continued until his untimely death on December 10, 1967. Today, the mission of the Otis Redding Foundation, established in 2007 by Mrs. Zelma Redding, is to empower, enrich, and motivate all young people through programs involving music, writing, and instrumentation. To learn more, visit: otisreddingfoundation.org.

» Have you read this book? We'd like to know what you think about it - write a review about Respect book by Otis Redding and you'll earn 50c in Boomerang Bucks loyalty dollars (you must be a Boomerang Books Account Holder - it's free to sign up and there are great benefits!)


A Preview for this title is currently not available.
More Books By Otis Redding
View All