NONE WHO ENTER THE WORLD HOUSE LEAVE IT UNCHANGED. In some rooms, forests grow; animals roam and objects come to life. Great secrets and treasures await the brave or foolhardy. And at the very top of the house, the prisoner it was all built to contain sat behind a locked door waiting for the key to turn.

The day that happened, the world ended.

A sequel to the stunning "The World House".

Other Editions - Restoration by Guy Adams 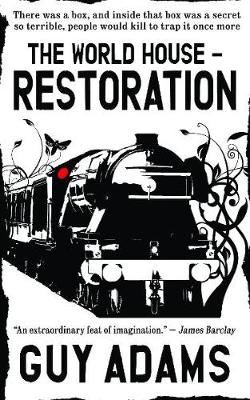 » Have you read this book? We'd like to know what you think about it - write a review about Restoration book by Guy Adams and you'll earn 50c in Boomerang Bucks loyalty dollars (you must be a Boomerang Books Account Holder - it's free to sign up and there are great benefits!)

Guy Adams trained and worked as an actor for twelve years before becoming a full-time writer. If nothing else this proves he has no concept of a sensible career. He mugged someone on Emmerdale, performed a dance routine as Hitler and spent eighteen months touring his own comedy material around clubs and theatres. He is the author of the best-selling Rules of Modern Policing: 1973 Edition, a spoof police manual 'written by' DCI Gene Hunt of Life On Mars. Published by Transworld, it has sold over 120, 000 copies. Guy has also written a two-volume series companion to the show published by Simon & Schuster;a Torchwood novel, The House That Jack Built (BBC Books); and The Case Notes of Sherlock Holmes, a fictional facsimile of a scrapbook kept by Doctor John Watson. Carlton Books published it in 2009 in association with the Estate of Sir Arthur Conan Doyle, to celebrate the 150th anniversary of the writer's birth. The author lives in Alicante, Spain.

A Preview for this title is currently not available.
More Books By Guy Adams
View All

The Girl, the Penguin, the Home-Schooling and the Gin: A hilarious parody of the million-copy bestseller, The Boy, The Mole, The Fox and The Horse - for parents everywhere
$24.03 $26.70