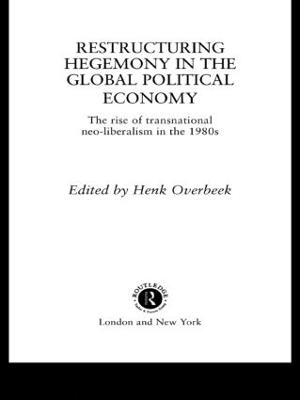 The Rise of Transnational Neo-Liberalism in the 1980s

Since the late 1970s, the spread of Neo-liberalism and the failure of socialist economies and systems in Eastern Europe have resulted in a practically unchallenged hegemony of international capital across the globe. Neo-liberalism is now the dominant ideology, legitimizing the privatisation of state-controlled economies and the substitution of the market for social provision and basic welfare. In Restructuring Hegemony in the Global Political Economy the authors argue that this process began with the defeat of the New International Economic Order, the Euro-Communist ascendency in Western Europe, the overthrow of the Allende government in Chile, and culminated in the collapse of practical socialism. They assert that the victory of neo-liberalism is now so complete that its radical features have come to be accepted as the new normality.

» Have you read this book? We'd like to know what you think about it - write a review about Restructuring Hegemony in the Global Political Economy book by Henk W Overbeek and you'll earn 50c in Boomerang Bucks loyalty dollars (you must be a Boomerang Books Account Holder - it's free to sign up and there are great benefits!)


A Preview for this title is currently not available.
More Books By Henk W Overbeek
View All

The State-Capital Nexus in the Global Crisis: Rebound of the Capitalist State
$85.49 $94.99