The enigmatic character of The Art of Fugue became apparent as early as in its first edition, printed more than a year after the composer's death. Carl Philipp Emanuel Bach, who published both the first and the second editions, raised several unsolved questions regarding this opus. Anatoly P Milka presents a consistent and coherent solution to the unresolved questions about the history, structure and appearance of J.S. Bach's The Art of Fugue, opening new perspectives for further exploration of this musical masterpiece. Milka challenges the present scholarly consensus that there exist two different versions of The Art of Fugue (the Autograph and the Original Edition) and argues that Bach had considered four versions, of which only two are apparent and have been discussed so far. Only Bach's illness and death prevented him from fulfilling his plan and publishing a fourth, conclusive version of his opus.

Other Editions - Rethinking J.S. Bach's The Art of Fugue by Anatoly P. Milka 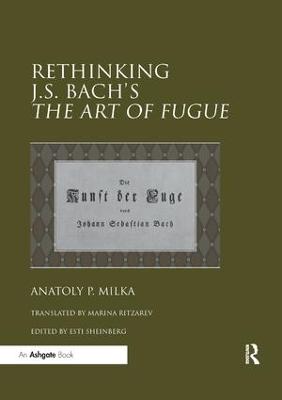 » Have you read this book? We'd like to know what you think about it - write a review about Rethinking J.S. Bach's The Art of Fugue book by Anatoly P. Milka and you'll earn 50c in Boomerang Bucks loyalty dollars (you must be a Boomerang Books Account Holder - it's free to sign up and there are great benefits!)

Anatoly P. Milka is Professor and Dr Habil. of Musicology at the St Petersburg Conservatory and the St Petersburg State University, Russia. His publications in Russian include Theoretical Foundations of Functionality in Music; Bach's Musical Offering: Toward Reconstruction and Interpretation; Intriguing Bachiana (with Tatiana Shabalina); a facsimile edition of L'A.B.C. Musical von Gottfried Kirchhoff, and Bach's The Art of Fugue: Toward Reconstruction and Interpretation. This is his first book appearing in English. Marina Ritzarev is Professor and Dr Habil. of Musicology. She was a student and scholar in St Petersburg and Moscow before moving to Israel in 1990, where she teaches at Bar-Ilan University. She has authored books in Russian on Dmitry Bortniansky, Maxim Berezovsky, Sergei Slonimsky, and the Russian Sacred Concerto. Her two books in English - Eighteenth-Century Russian Music and Tchaikovsky's 'Pathetique' and Russian Culture - were published by Ashgate. Esti Sheinberg is Associate Professor of Practice in Music History at the Glenn Korff School of Music, University of Nebraska-Lincoln, USA (BA in musicology at the University of Tel-Aviv, Israel; PhD in music at the University of Edinburgh, UK). She has authored Irony, Satire, Parody and the Grotesque in the Music of Shostakovich, and edited Music Semiotics: A Network of Significations - in Honour and Memory of Raymond Monelle (Ashgate).

A Preview for this title is currently not available.
More Books By Anatoly P. Milka
View All