The Revenge Of Geography

Description - The Revenge Of Geography by Robert D. Kaplan

"In this provocative, startling book, Robert D. Kaplan, the bestselling author of Monsoon and Balkan Ghosts, offers a revelatory new prism through which to view global upheavals and to understand what lies ahead for continents and countries around the world. n The Revenge of Geography, Kaplan builds on the insights, discoveries, and theories of great geographers and geopolitical thinkers of the near and distant past to look back at critical pivots in history and then to look forward at the evolving global scene. Kaplan traces the history of the world's hot spots by examining their climates, topographies, and proximities to other embattled lands. The Russian steppe's pitiless climate and limited vegetation bred hard and cruel men bent on destruction, for example, while Nazi geopoliticians distorted geopolitics entirely, calculating that space on the globe used by the British Empire and the Soviet Union could be swallowed by a greater German homeland. aplan then applies the lessons learned to the present crises in Europe, Russia, China, the Indian subcontinent, Turkey, Iran, and the Arab Middle East. The result is a holistic interpretation of the nex

Other Editions - The Revenge Of Geography by Robert D. Kaplan 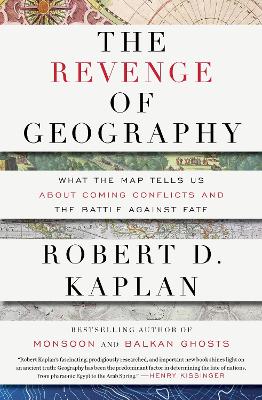 Book Reviews - The Revenge Of Geography by Robert D. Kaplan

» Have you read this book? We'd like to know what you think about it - write a review about Revenge Of Geography book by Robert D. Kaplan and you'll earn 50c in Boomerang Bucks loyalty dollars (you must be a Boomerang Books Account Holder - it's free to sign up and there are great benefits!)

Robert D. Kaplan is chief geopolitical analyst for Stratfor, a private global intelligence firm, and the author of fourteen books on foreign affairs and travel translated into many languages, including The Revenge of Geography- What the Map Tells Us About Coming Conflicts and the Battle Against Fate; Monsoon- The Indian Ocean and the Future of American Power; Balkan Ghosts- A Journey Through History; and Warrior Politics- Why Leadership Demands a Pagan Ethos. He has been a foreign correspondent for The Atlantic for more than a quarter-century. In 2011 and 2012, Foreign Policy magazine named Kaplan among the world's Top 100 Global Thinkers. From 2009 to 2011, he served under Secretary of Defense Robert Gates as a member of the Defense Policy Board. Since 2008, he has been a senior fellow at the Center for a New American Security in Washington. From 2006 to 2008, he was the Class of 1960 Distinguished Visiting Professor in National Security at the U.S. Naval Academy, Annapolis. i>From the Hardcover edition.

A Preview for this title is currently not available.
More Books By Robert D. Kaplan
View All

The Return of Marco Polo's World: War, Strategy, and American Interests in the Twenty-first Century
$25.49 $29.99