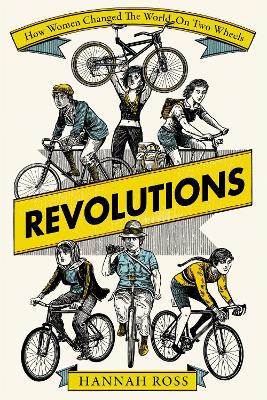 Revolutions: How Women Changed the World on Two Wheels

Description - Revolutions: How Women Changed the World on Two Wheels by Hannah Ross

Simone de Beauvoir borrowed her lover's bike to cycle around Paris in the 1940s, instantly falling in love with the freedom it gave her (even when an accident caused her to lose a tooth). Alice Hawkins, a factory worker from Leicester, pedal-powered her fight for universal suffrage as the bicycle became a cornerstone of her work to recruit women to the cause. Zahra Naarin Hussano challenged religious and cultural taboos in Afghanistan to ride a bike and teach others to do the same. As a twenty-four-year-old Latvian immigrant living in Boston, in 1894 Annie 'Londonderry' Kopchovsky became the first woman to cycle around the world. She took up the challenge, despite never having ridden a bike before, after two men bet a woman couldn't do it.Many of these women were told they couldn't or shouldn't cycle, but they did so anyway. Whether winning medals or spreading the word about votes for women, their stories are an inspiration. In this gloriously celebratory book, Hannah Ross introduces us to the women who are part of the rich and varied history of cycling, many of whom have been pushed to the margins or forgotten.

Other Editions - Revolutions: How Women Changed the World on Two Wheels by Hannah Ross » Have you read this book? We'd like to know what you think about it - write a review about Revolutions: How Women Changed the World on Two Wheels book by Hannah Ross and you'll earn 50c in Boomerang Bucks loyalty dollars (you must be a Boomerang Books Account Holder - it's free to sign up and there are great benefits!)