A Puritan Alternative to the Book of Common Prayer

The English Civil War and its aftermath was a time of human devastation, political uncertainty and religious instability. Amid the turmoil of those times, however, the Church of England also saw intense liturgical inventiveness. The Directory for Public Worship, Jeremy Taylor's Communion Office, and Richard Baxter's Reformed Liturgy, are all examples of resourceful liturgies born out of the ashes of the English Civil War. The Church of England had not witnessed such liturgical innovation since Thomas Cranmer, and would not see such creativity again until the end of the twentieth century - at least in terms of liturgical texts. In Richard Baxter's Reformation of the Liturgy, Glen J. Segger examines the theology and ecclesiology of Baxter's liturgical opus. While never approved for public use, the Reformed Liturgy remains an important and creative liturgy representative of those who fought for their Puritan convictions, but lost. 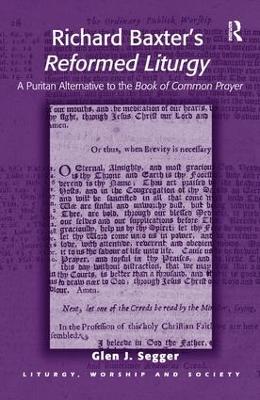 » Have you read this book? We'd like to know what you think about it - write a review about Richard Baxter's Reformed Liturgy book by Glen J. Segger and you'll earn 50c in Boomerang Bucks loyalty dollars (you must be a Boomerang Books Account Holder - it's free to sign up and there are great benefits!)

Glen J. Segger received his PhD from Drew University (Madison, NJ) in 2008. The defence of his dissertation, 'Petition for Peace: A Theological Analysis of Richard Baxter's Reformed Liturgy in its Ecclesiological Context' earned him this degree with distinction.

A Preview for this title is currently not available.
More Books By Glen J. Segger
View All