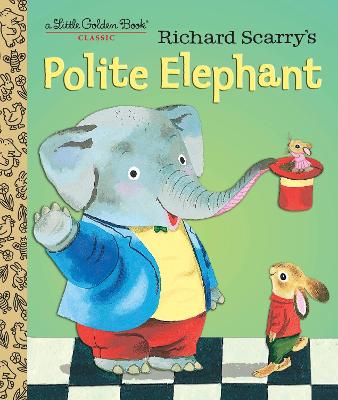 A beloved Richard Scarry title from 1963 is now available as a Little Golden Book!

When it comes to visiting a neighbor, enjoying a meal, or hosting a playdate, no one does it with better manners than the polite elephant. Richard Scarry's witty, colorful artwork of the elephant and his friends at play will delight young readers. They'll want to follow the elephant's gracious example as he waits in line for the bus, helps out, and passes the salt! Most importantly, they'll learn just how fun and easy it is to be polite.

» Have you read this book? We'd like to know what you think about it - write a review about Richard Scarry's Polite Elephant book by Richard Scarry and you'll earn 50c in Boomerang Bucks loyalty dollars (you must be a Boomerang Books Account Holder - it's free to sign up and there are great benefits!)

RICHARD SCARRY is one of the world's best-loved children's authors EVER! In his extraordinary career, Scarry illustrated over 150 books, many of which have never been out of print. His books have sold over 100 million copies around the world and are currently published in over twenty languages. No other illustrator has shown such a lively interest in the words and concepts of early childhood. Richard Scarry was posthumously awarded a Lifetime Achievement Award from the Society of Illustrators in 2012.