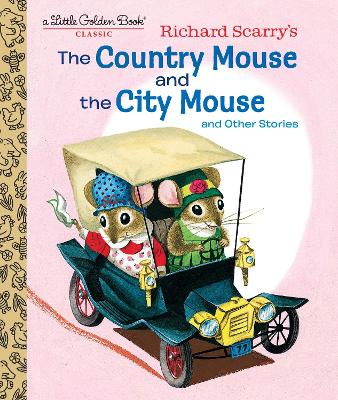 Richard Scarry's The Country Mouse and the City Mouse

The one and only Richard Scarry retells three beloved fables of Aesop in this must-have Little Golden Book, now back in print! Featuring The Country Mouse and the City Mouse, The Fox and the Crow, and The Dog and His Bone, this witty classic-previously only available in a story collection-is now available as a Little Golden Book.

Little Golden Books have been loved by children for over 75 years. When they were first published in 1942, high-quality books for children hadn't been available at a price most people could afford. Little Golden Books changed that! Priced at just 25 cents and sold where people shopped every day, they caused an instant sensation and were soon purchased by the hundreds of thousands. Created by such talented writers as Margaret Wise Brown (author of Goodnight Moon) and Richard Scarry, Little Golden Books have helped millions of children develop a lifelong love of reading. Today, Little Golden Books feature beloved classics such as The Poky Little Puppy and Scuffy the Tugboat, hot licenses, and new original stories-the classics of tomorrow, ready to be discovered between their sturdy cardboard covers and gold-foil spines.

» Have you read this book? We'd like to know what you think about it - write a review about Richard Scarry's The Country Mouse and the City Mouse book by Patricia Scarry and you'll earn 50c in Boomerang Bucks loyalty dollars (you must be a Boomerang Books Account Holder - it's free to sign up and there are great benefits!)

PATRICIA SCARRY wrote many beloved children's books over the course of her career, including The Sweet Smell of Christmas; The Bunny Book; Good Night, Little Bear; Just for Fun; and many more. One of her frequent collaborators was her husband, Richard Scarry. RICHARD SCARRY is one of the world's best-loved children's authors EVER! In his extraordinary career, Scarry illustrated over 150 books, many of which have never been out of print. His books have sold over 100 million copies around the world and are currently published in over twenty languages. No other illustrator has shown such a lively interest in the words and concepts of early childhood. Richard Scarry was posthumously awarded a Lifetime Achievement Award from the Society of Illustrators in 2012.

A Preview for this title is currently not available.
More Books By Patricia Scarry
View All