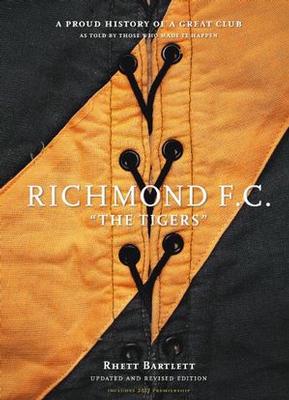 On October 31, 1907, the Richmond Football Club committee accepted an invitation to become a member of the then-fledgling Victorian Football League. The Tigers now represent one of the game's great and
enduring cultures, a tradition built on tribal, inner-city football, but which today thrives on a national stage. The Tigers are one of the great clubs of the Australian Football League, boasting in excess of 100,000 members on the back of their 2017 AFL Premiership triumph.

The unyielding passion for the club and the team is represented vividly in more than 100 interviews with players, past and present,
conducted by Rhett Bartlett, football historian and son of club immortal, KB-Kevin Bartlett.

This is the raw story of a club and its people, their glory years and their lean ones. The tale is told in the words of those who lived the
dream. From Vic Thorp and Jack Titus, to Royce Hart and Matthew Richardson, and icons such as Jack Dyer and Francis Bourke, Tom Hafey and Kevin Bartlett, the story of the Yellow and Black is brought to life.
This fully revised and updated version continues the tradition of past players and officials talking frankly about their time at the club, including interviews with Michael Malthouse, Mal Brown, Bruce Monteath, Brendon Gale, Peggy O'Neal and the late Maurice Rioli. Fully updated to include the club's 2017 Premiership, this passionate account of the club's history is a must for members of the Tiger Army.

» Have you read this book? We'd like to know what you think about it - write a review about Richmond FC: "The Tigers" book by Rhett Bartlett and you'll earn 50c in Boomerang Bucks loyalty dollars (you must be a Boomerang Books Account Holder - it's free to sign up and there are great benefits!)