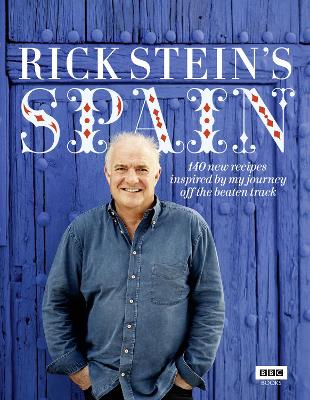 140 new recipes inspired by my journey off the beaten track

'I've wanted to make a series in Spain for a long time. I love Spanish food, I've been going there since I was a young boy - but until quite recently I don't think people really took the food seriously. Thanks to a handful of really dedicated Spanish chefs and a growing enthusiasm for its rugged flavours, that has all begun to change. To me the underlying point of journeying to Spain would be to discover the 'duende' in the cooking. By that I mean a sense of soul, of authenticity. The word is normally used in flamenco but I think it could be equally applied to the art of Spanish cooking because to my mind, in really good food, there is a communication between the cook and diner that amounts to art.' Rick SteinIn his beautifully designed and illustrated cookbook to accompany a major BBC2, 4-part series, Rick has selected over 140 recipes that capture the authentic taste of Spain today.Spain is a country that tantalises every sense with its colourful sights, evocative music, vibrant traditions and bold cookery. Spanish cooking has a rich history, with flavours reflecting a broad range of cultural influences. Rick samples his way through the specialties and hidden treats of each region, taking in the changing landscape from the mountainous northern regions through the Spanish plains to Mediterranean beaches.With over 100 Spanish recipes and location photographs, this is an essential cookbook for food-lovers as well as a stunning culinary guide to a diverse country.

» Have you read this book? We'd like to know what you think about it - write a review about Rick Stein's Spain book by Rick Stein and you'll earn 50c in Boomerang Bucks loyalty dollars (you must be a Boomerang Books Account Holder - it's free to sign up and there are great benefits!)

Rick Stein's passion for using good quality local produce and his talent for creating delicious flavour combinations in his books and restaurants have won him a host of awards, accolades and fans. As well as presenting a number of television series, he has published many best-selling cookery books, including French Odyssey, Mediterranean Escapes, Coast to Coast and Far Eastern Odyssey. Rick is a firm supporter of sustainable farming and fishing techniques, which he strives to maintain in Padstow, Cornwall, where he runs four acclaimed restaurants and a seafood cookery school, as well as a delicatessen and patisserie. In 2003 Rick was awarded an OBE for services to West Country tourism. He divides his time between Padstow and Australia, where he opened a restaurant, Rick Stein at Bannister's, in 2009.