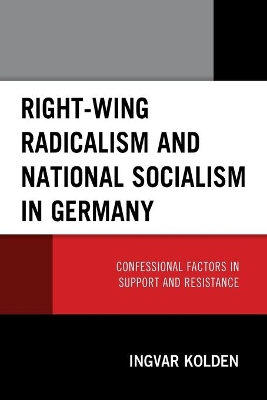 Right-Wing Radicalism and National Socialism in Germany: Confessional Factors in Support and Resistance

This book explores the total resistance to Nazism among the Catholic Christian voters of the Zentrum party in the elections in German states in the Interwar period. Kolden explains the unique Catholic resistance by comparing the diverging evolutions of Catholic and Protestant cultures and mentalities since the awakening of German nationalism in the late 18th century. During the Empire (1871-1918) both socialists and Catholics were regarded as pariah groups by the dominant non-socialist Protestant majority, and more so after the WW1 defeat, when the pariah-parties, together with Protestant liberals, tried to accommodate the new democratic circumstances with their Weimar Constitution. When right-wing radicals, and eventually the Nazis, increased their support -largely on behalf of the rapid shrinking number of liberals-the Catholic church leaders showed a stubborn stance against the rightists, issuing several resolutions of condemnation from the middle of the 1920s until 1933, whereas no such appeared from their Protestant counterparts. In contrast, many local Protestant clergymen agitated for the Nazi party. The anti-Catholic sentiment, which had been obvious among some Nazis in the 1920s, was intensified with the publication of Alfred Rosenbergs The Myth of the 20th Century after the election in 1930, which enhanced the antagonism. The basic and profound difference in Catholic and Protestant cultures also appears in the difference between the less Christian-profiled agrarian parties, which were confessionally separated: antisemitic and right-wing radical Protestant parties confronted by one left-wing and democratic Catholic party. By1945 the bulk of the former rightist Protestants sided with the Catholics, who reorganized their party to the non-denominational CDU, which has been the mightiest proponent in Europe of the former party's ambitions of democracy, stability, anti-racism, human rights, and European unity.

» Have you read this book? We'd like to know what you think about it - write a review about Right-Wing Radicalism and National Socialism in Germany: Confessional Factors in Support and Resistance book by Ingvar Kolden and you'll earn 50c in Boomerang Bucks loyalty dollars (you must be a Boomerang Books Account Holder - it's free to sign up and there are great benefits!)