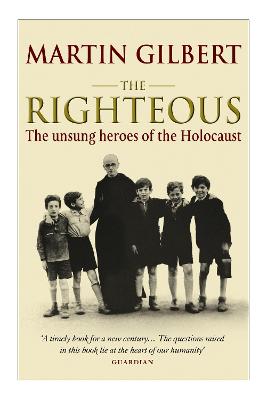 Story of the unsung heroes and heroines of the Holocaust, the 'Righteous Gentiles', brave individuals all over occupied Europe who hid, protected and helped Jews.

'He who saves one life, it is as if he saved an entire world'The Holocaust will be forever numbered amongst the darkest of days in human civilisation. Yet even in that darkness, there were sparks of light. Many will recognise the names of Oskar Schindler, Raoul Wallenberg and Miep Gies. But there were thousands of others throughout Europe who risked their own lives to save Jews from the Nazis and their horrific campaign of obliteration that was the Holocaust.By the beginning of 2002, more than 19,000 non-Jews had been recognized as Righteous (Among the Nations) by Yad Vashem, the Holocaust museum in Jerusalem. Some were officials, some were clergy; others were citizens of countries who united in their efforts to protect Jews. Many were merely individuals who had the courage to stand up against a growing tide of collaboration and simply say- 'We did what we had to do'.Martin Gilbert, the foremost British historian of the Holocaust, here presents the evidence collected over many years. Cumulatively, these accounts, from every occupied country in Europe, from the Baltic to the Mediterranean, from the Atlantic to the Black Sea, and from inside the Third Reich itself, form an inspiring tribute to those heroic individuals who, without thought to the risk to their own lives, dared to challenge barbarism, and hold out the hand of rescue to the Jews of Europe.

» Have you read this book? We'd like to know what you think about it - write a review about Righteous book by Dr Martin Gilbert and you'll earn 50c in Boomerang Bucks loyalty dollars (you must be a Boomerang Books Account Holder - it's free to sign up and there are great benefits!)

Sir Martin Gilbert is Winston Churchill's official biographer, and one of Britain's leading historians. His The Holocaust- The Jewish Tragedy is considered the classic work on the subject, and he is the author of more than sixty other books, including Churchill- A Life, First World War, Second World War, Israel- A History, A History of the Twentieth Century and The Righteous. He lives in London.

A Preview for this title is currently not available.
More Books By Dr Martin Gilbert
View All