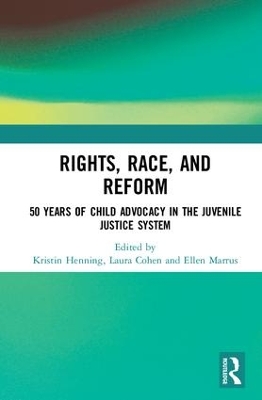 50 Years of Child Advocacy in the Juvenile Justice System

In 1962, a 15-year-old Arizona boy named Gerald Gault may or may not have made a lewd phone call to a neighbor. Gerald was arrested, prosecuted, removed from his parents' custody, and sent to a juvenile prison, all without legal representation. Gerald's mother's outrage at the treatment of her son eventually propelled the case to the United States Supreme Court. With its sweeping 1967 decision in In re Gault, the Court revolutionized the American juvenile court system by finding that children charged with delinquency have a constitutional right to counsel.

This anthology, which commemorates the fiftieth anniversary of the Gault decision, blends, across its three parts, legal and historical analyses, oral history, and personal narrative to provide an overview of modern Supreme Court juvenile justice jurisprudence, the advocates and organizations that defend children in juvenile court, the role these lawyers have played in the fight for justice for accused children, and the contemporary challenges facing juvenile defenders and their clients. The authors are leading juvenile justice reformers, advocates, and scholars, all of whom have been deeply involved in shaping modern juvenile justice policy and practice and most of whom have represented children in juvenile court.

This book is for everyone concerned about justice in America. The personal narratives about children in the system will intrigue students and academics, engage lay individuals who are interested in children's rights, and guide professionals, legislators, and other policymakers involved in juvenile justice reform and criminology.

» Have you read this book? We'd like to know what you think about it - write a review about Rights, Race, and Reform book by Kristin Henning and you'll earn 50c in Boomerang Bucks loyalty dollars (you must be a Boomerang Books Account Holder - it's free to sign up and there are great benefits!)

A Preview for this title is currently not available.
More Books By Kristin Henning
View All