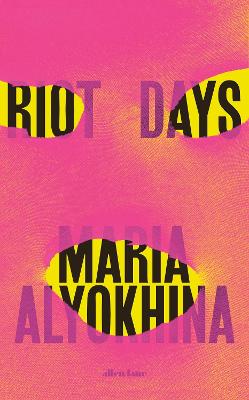 We hit upon the idea of making a movie about the Revolution. A feature film that would be shown in all the movie theaters. The short video about the frozen chicken up the cunt was all well and good, but it wasn't for a mass audience. Art for the masses means Hollywood. Calling people to revolution requires a big screen. We visited at least twenty studios over the course of a week- identical offices; blinding, snow-white smiles. We had no problem getting appointments, because they were writing about us in all the newspapers."We want to make a movie about revolution.""Which revolution might that be?""The Russian revolution.""Which one do you mean? The 1917 Revolution?""No! The one that's happening now.""But you don't have any revolution now.""Oh, really?" » Have you read this book? We'd like to know what you think about it - write a review about Riot Days book by Maria Alyokhina and you'll earn 50c in Boomerang Bucks loyalty dollars (you must be a Boomerang Books Account Holder - it's free to sign up and there are great benefits!)

Maria Alyokhina is a political activist, artist and member of Pussy Riot collective. After 'Punk Prayer' - a Pussy Riot performance of the song 'Mother Mary, banish Putin' in Moscow Cathedral on 21 February 2012 she was convicted of 'hooliganism motivated by religious hatred', sentenced for two years' imprisonment and transported to a penal colony in the Urals, one of the hardest prison systems in the world. As a political prisoner she campaigned to improve the lives of her fellow inmates in the penal colony and continued her work as an activist and artist outside. She is a co-founder of the independent Russian media outlet MediaZona and actor with the Belarus Free Theatre.

A Preview for this title is currently not available.
More Books By Maria Alyokhina
View All