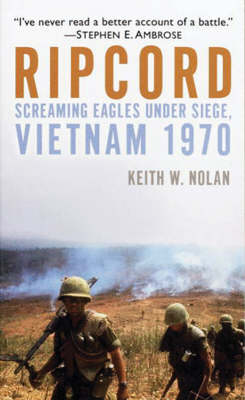 Fire-Support Base Ripcord was established as the first part of a campaign to push the North Vietnamese Army (NVA) out of the A Shau Valley, an operation that never really came to fruition as originally conceived. The ridge on which Ripcord would be built was seized in April 1970 but reverted to the NVA only three months later, on 23 July. Because of political considerations, division headquarters proved reluctant to be drawn into the kind of bloody slugging match that would have been required to push the enemy out of their entrenchments around Ripcord.

Ripcord was the Screaming Eagles' last chance to do significant damage to the NVA in the A Shau Valley before the division was withdrawn from Vietnam and returned to the United States. At Ripcord, the enemy counterattacked with ferocity, using mortar and anti-aircraft fire to inflict heavy causalities on the units operating there. The battle lasted four and a half months and exemplified the ultimate frustration of the Vietnam War: the inability of the American military to bring to bear its enormous resources to win on the battlefield. In the end, the 101st evacuated Ripcord, leaving the NVA in control of the battlefield. Contrary to the mantra`We won every battle but lost the war', the United States was defeated at Ripcord. Now, at last, the full story of this terrible battle can be told.

» Have you read this book? We'd like to know what you think about it - write a review about Ripcord book by Keith W. Nolan and you'll earn 50c in Boomerang Bucks loyalty dollars (you must be a Boomerang Books Account Holder - it's free to sign up and there are great benefits!)

Keith W. Nolan is acknowledged as the foremost chronicler of the Vietnam War. He is the author of nine other Vietnam War combat histories and is most recently the coauthor of A Hundred Miles of Bad Road. Nolan lives with his wife and daughter near St. Louis, Missouri.

A Preview for this title is currently not available.
More Books By Keith W. Nolan
View All