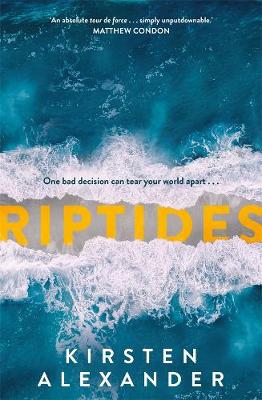 One bad decision can tear your world apart . . .

December 1974. Abby Campbell and her brother Charlie are driving to their father's farm on a dark country road when they swerve into the path of another car, forcing it into a tree. The pregnant driver is killed instantly.

In the heat of the moment, Abby and Charlie make a fateful decision. They flee, hoping heavy rain will erase the fact they were there. They both have too much to lose.

But they have no idea who they've just killed or how many lives will be affected by her death. Soon the truth is like a riptide they can't escape, as their terrible secret pulls them down deeper by the day.
'An absolute tour de force . . . simply unputdownable.' Matthew Condon

» Have you read this book? We'd like to know what you think about it - write a review about Riptides book by Kirsten Alexander and you'll earn 50c in Boomerang Bucks loyalty dollars (you must be a Boomerang Books Account Holder - it's free to sign up and there are great benefits!)

Riptides is the second novel by Australian author, Kirsten Alexander. Abigail Campbell and her brother Charlie, driving to their father’s Queensland outback farm one December night, are the cause of a fatal car accident. A heavily-pregnant young woman dies instantly and, despite Abby’s best efforts, her brother coerces her to leave the scene, reasoning nothing more can be done for the victim, and their lives will be the worse for admitting their part.

Arriving at John Scott’s farm the next morning, they find a police constable breaking the news that his fiancée has perished in the accident. Exactly where Skye was going is unclear, but their father’s engagement to a woman of their own age comes as a shock to the siblings, on top of dealing with John’s grief. And the fact that they are responsible for the death of their half-brother or -sister.

Meanwhile, the police are not completely convinced from the crash scene that Skye’s fate was an accident. And they are not entirely satisfied with the cover story that the siblings tell; even a distraught John Scott is considered a suspect. After they have arrived at Abby’s Brisbane home, John reveals that Skye had a young son, whom he intends to rescue from a violent father.

Taking place over a period of four months from the end of 1974, Alexander’s story grips from the first page and doesn’t let go. Brisbane is well depicted and the heat and humidity of Queensland summer is palpable. Alexander locates her tale firmly in time with mentions of popular culture, headline news and police corruption. Her characters certainly fit with that era and their dialogue is credible.

The twin narrative, carried by Charlie and Abby, allows the reader into the heads of this twenty-something duo. Neither guilt nor remorse seem to form part of Charlie's repertoire, pointing to his shallow, self-centred, entitled nature; rather, he seems intent on coming to terms with the event and getting back to his idyllic life in Bali, happy to remain an irresponsible adolescent.

Abby certainly feels guilty, but seems more focussed on measuring the personal cost of telling the truth, preferring to maintain the status quo. All their fine rationalising of their actions is quite staggering: surely nothing can excuse a deed so large?

The first half of the story is delivered as deadly serious, but then, as she ramps up the tension, Alexander inserts some instances of black humour: the attempted kidnapping is almost farcical. Shocking and thought-provoking, this is an incredibly powerful read. This unbiased review is from an uncorrected proof copy provided by Better Reading Preview and Penguin Random House Australia.

Break The Fall: The compulsive sports novel about the power of standing together
Jennifer Iacopelli
$15.29 $17.99

Arguing with Zombies: Economics, Politics, and the Fight for a Better Future
Paul Krugman
$48.95 $49.95

You're Not Listening: What You're Missing and Why It Matters
Kate Murphy
$29.75 $35.00
More Books By Kirsten Alexander
View All