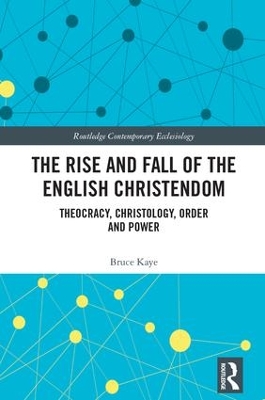 The Rise and Fall of the English Christendom

English Christendom has never been a static entity. Evangelism, politics, conflict and cultural changes have constantly and consistently developed it into myriad forms across the world. However, in recent times that development has seemingly become a general decline. This book utilises the motif of Christendom to illuminate the pedigree of Anglican Christianity, allowing a vital and persistent dynamic in Christianity, namely the relationship between the sacred and the mundane, to be more fundamentally explored.

Each chapter seeks to unpack a particular historical moment in which the relations of sacred and mundane are on display. Beginning with the work of Bede, before focusing on the Anglo Norman settlement of England, the Tudor period, and the establishment of the church in the American and Australian colonies, Anglicanism is shown to consistently be a religio-political tradition. This approach opens up a different set of categories for the study of contemporary Anglicanism and its debates about the notion of the church. It also opens up fresh ways of looking at religious conflict in the modern world and within Christianity.

This is a fresh exploration of a major facet of Western religious culture. As such, it will be of significant interest to scholars working in Religious History and Anglican Studies, as well as theologians with an interest in Western Ecclesiology.

Buy The Rise and Fall of the English Christendom by Bruce Kaye from Australia's Online Independent Bookstore, Boomerang Books. » Have you read this book? We'd like to know what you think about it - write a review about Rise and Fall of the English Christendom book by Bruce Kaye and you'll earn 50c in Boomerang Bucks loyalty dollars (you must be a Boomerang Books Account Holder - it's free to sign up and there are great benefits!)

Bruce Kaye is an Adjunct Research Professor in the Centre for Public and Contextual Theology at Charles Sturt University, Australia, and was the General Secretary of the Anglican Church of Australia from 1994 to 2004. He is the author of eight books, editor of ten further volumes and has written some sixty journal articles as well as contributing to newspapers, radio and TV. He has taught at various institutions around the world, including Freiburg-im-Breisgau, Cambridge and Seattle, is also the foundation editor of the Journal of Anglican Studies.

A Preview for this title is currently not available.
More Books By Bruce Kaye
View All

The Rise and Fall of the English Christendom: Theocracy, Christology, Order and Power
$77.21 $77.99

Conflict and the Practice of Christian Faith: The Anglican Experiment
$52.90 $58.78