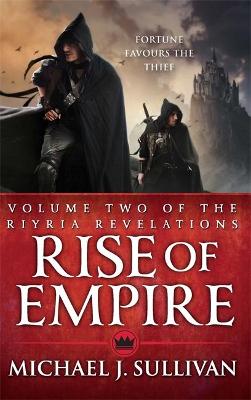 The birth of the Nyphron Empire has brought war to Melengar. To save her kingdom, Princess Arista runs a desperate gamble when she defies her brother and hires Royce and Hadrian to perform a dangerous mission behind the enemy's lines.As the power of the Nyphron Empire grows, so does Royce's suspicion that the wizard Esrahaddon is using the thieves as pawns in his own shadowy struggle for power.To find the truth, he must unravel the secret of Hadrian's past. What he discovers leads the thieves to the ends of the world on a journey amid treachery and betrayals, forcing Hadrian to face a past he hoped never to see again.

Other Editions - Rise Of Empire by Michael J Sullivan » Have you read this book? We'd like to know what you think about it - write a review about Rise Of Empire book by Michael J Sullivan and you'll earn 50c in Boomerang Bucks loyalty dollars (you must be a Boomerang Books Account Holder - it's free to sign up and there are great benefits!)

Born in Detroit, Michigan, Michael J. Sullivan has worked as a commercial artist and illustrator, founding his own advertising agency in 1996, which he closed in 2005 to write full time. He currently resides in Fairfax, Virginia with his wife and three children. The author's website can be found at michaelsullivan-author.com and on twitter @author_sullivan.