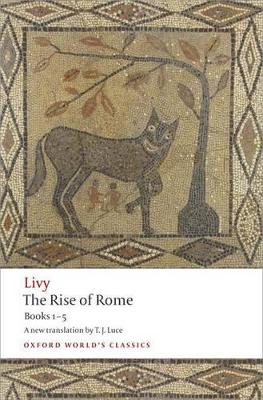 The Rise of Rome

Books One to Five

Description - The Rise of Rome by Livy

`the fates ordained the founding of this great city and the beginning of the world's mightiest empire, second only to the power of the gods' Romulus and Remus, the rape of Lucretia, Horatius at the bridge, the saga of Coriolanus, Cincinnatus called from his farm to save the state - these and many more are stories which, immortalised by Livy in his history of early Rome, have become part of our cultural heritage. The historian's huge work, written between 20 BC and AD 17, ran to 12 books, beginning with Rome's founding in 753 BC and coming down to Livy's own lifetime (9 BC). Books 1-5 cover the period from Rome's beginnings to her first great foreign conquest, the capture of the Etruscan city of Veii and, a few years later, to her first major defeat, the sack of the city by the Gauls in 390 BC.

Book Reviews - The Rise of Rome by Livy

» Have you read this book? We'd like to know what you think about it - write a review about Rise of Rome book by Livy and you'll earn 50c in Boomerang Bucks loyalty dollars (you must be a Boomerang Books Account Holder - it's free to sign up and there are great benefits!)

A Preview for this title is currently not available.
More Books By Livy
View All