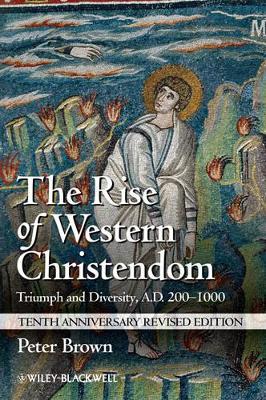 The Rise of Western Christendom

Description - The Rise of Western Christendom by Peter Brown

This tenth anniversary revised edition of the authoritative text
on Christianity?s first thousand years of history features a
new preface, additional color images, and an updated bibliography.
The essential general survey of medieval European Christendom,
Brown?s vivid prose charts the compelling and tumultuous rise
of an institution that came to wield enormous religious and secular
power.
? Clear and vivid history of Christianity?s
rise and its pivotal role in the making of Europe

? Written by the celebrated Princeton scholar who
originated of the field of study known as ?late
antiquity?

Book Reviews - The Rise of Western Christendom by Peter Brown

» Have you read this book? We'd like to know what you think about it - write a review about Rise of Western Christendom book by Peter Brown and you'll earn 50c in Boomerang Bucks loyalty dollars (you must be a Boomerang Books Account Holder - it's free to sign up and there are great benefits!)

Peter Brown is Emeritus Professor of History at Princeton University. He is a celebrated scholar and author of numerous seminal historical works, which include Augustine of Hippo (1967, 2000), The World of Late Antiquity (1971), The Cult of the Saints (1982), The Body and Society (1988), Power and Persuasion in Late Antiquity: Towards a Christian Empire (1992), Authority and the Sacred: Aspects of the Christianization of the Roman World (1995), Poverty and Leadership in the Later Roman Empire (2002), and the forthcoming Through the Eye of a Needle: Wealth, the Fall of Rome, and the Making of Christianity in the West, 350-550 AD (2012).

A Preview for this title is currently not available.
More Books By Peter Brown
View All