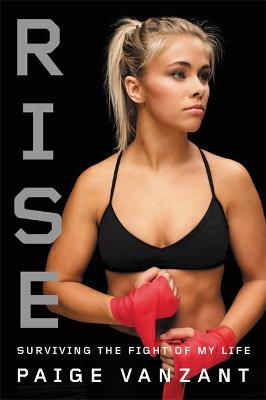 Surviving the Fight of My Life

THIS BOOK IS FOR ALL THOSE WHO GOT KNOCKED DOWN AND CAME UP SWINGING.Paige VanZant is a rising Mixed Martial Arts star in the UFC's women's strawweight division and holds a reputation for her ability to defeat obstacles and brutal fights in and out of the octagon. Long before she was a fighting champion and household name winning over fans on Dancing with the Stars with her beauty, strength, and infectiously bold personality, Paige struggled with her self-esteem.On Dancing with the Stars, Paige won hearts when she opened up for the first time about being bullied but there is so much more that she hasn't shared until now. The journey that brought Paige to the UFC is a stunning story of overcoming tragedy and finding the strength and skills to defend oneself in the face of evil. Within the pages of Rise is a girl who was so severely bullied in highschool she had garbage thrown on her, so tortured she had to move hometowns. She sought refuge but nothing worked until one day, feeling spiritually broken and emotionally shattered, she visited her dad at his gym, and everything changed: she decided to fight back. She became Paige VanZant, a bone-breaking, head-smashing competitor and world renowned fighter.Rise is the moving and inspiring journey of a woman who is not only one of the toughest fighters in the world, but also a beloved symbol of strength.

» Have you read this book? We'd like to know what you think about it - write a review about Rise book by Paige VanZant and you'll earn 50c in Boomerang Bucks loyalty dollars (you must be a Boomerang Books Account Holder - it's free to sign up and there are great benefits!)

Paige VanZant is an American martial artist who competes in the Women's Strawweight division of the Ultimate Fighting Champion.