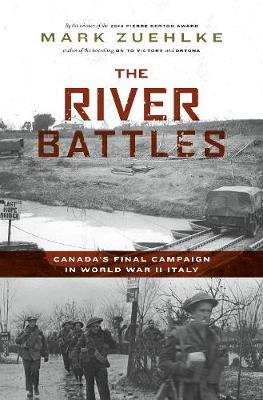 The story of I Canadian Corps's crossing of the Emilia-Romagna plain, in the thirteenth instalment of the bestselling Canadian Battle Series.

The Canadians called it the Promised Land. In late September 1944, the Emilia-Romagna plain before I Canadian Corps stretched to the far horizon-a deceptively wide-open space where the tanks could run free. Throughout British Eighth Army, hopes ran high that once it entered the plain, the Germans could be driven from Italy. As soon as the advance began, however, the plain's true nature was revealed: the land was criss-crossed by rivers, canals and drainage ditches over which all bridges had been demolished. With higher command urging haste, the Canadians entered a long and nightmarish series of battles to win crossings over each waterway, whose high banks provided the Germans with perfect defensive positions. Early fall rains caused rivers to spill their banks and transformed the countryside into the worst quagmire the soldiers had ever seen. More than five months of battle followed, with weeks of hard fighting required to advance from one river to the next. Each month, conditions only worsened, and the casualty rates rose appallingly. As their comrades fell one by one, most soldiers sought merely to survive. Doing that much required every measure of stamina, courage and fighting skill they possessed. The fifth and final Canadian Battle Series volume set in Italy, The River Battles tells the story of this campaign's last and hardest months. In riveting detail and with his trademark "you-are-there" style, Mark Zuehlke shines a light on this forgotten chapter of Canada's World War II experience.

» Have you read this book? We'd like to know what you think about it - write a review about River Battles: Canada's Final Campaign in World War II Italy book by Mark Zuehlke and you'll earn 50c in Boomerang Bucks loyalty dollars (you must be a Boomerang Books Account Holder - it's free to sign up and there are great benefits!)


A Preview for this title is currently not available.
More Books By Mark Zuehlke
View All