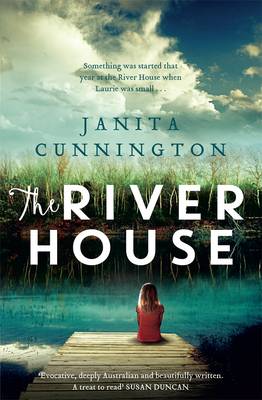 THE BOOK CLUB PICK OF 2016! The River House is a spellbinding debut novel, resonant of childhoods past and the beauty of the Australian countryside.

THE BOOK CLUB PICK OF 2016! The River House is a spellbinding debut novel, resonant of childhoods past and the beauty of the Australian countryside.

It is the late 1940s, and the Broody River runs through a maze of sandbanks into the Coral Sea. On its southern bank lies the holiday town of Baroodibah. But its northern shore is wild - unsettled except for the River House, an old weatherboard box on stumps where the Carlyle family take their holidays.

For four-year-old Laurie Carlyle the house and its untold stories fire the imagination. It is a place of boating trips and nature collections, of the wind howling, the sheoaks sighing and the pelicans soaring into the blue sky.

But when a squabble between Laurie and her older brother Tony takes an unexpected turn, she detects the first hints of family discord. As the years pass, the River House holidays seem to shine a light on the undercurrents in the family- the secret from her mother's past, the bitterness between Tony and their father Doug, and her sister Miranda's increasingly erratic and dangerous behaviour . . .

Following the family's story through the decades, The River House is a richly nostalgic novel about love and betrayal, personal tragedy and thwarted ambition, illusion and remorse. Above all it is about change, and the slow but relentless march of time.

Other Editions - The River House by Janita Cunnington » Have you read this book? We'd like to know what you think about it - write a review about River House book by Janita Cunnington and you'll earn 50c in Boomerang Bucks loyalty dollars (you must be a Boomerang Books Account Holder - it's free to sign up and there are great benefits!)

Janita Cunnington has been writing for much of her life, mostly under the desk - verse, stories, articles, musings - when her mind should have been on important matters. Some of her poems have been published, along with reams of public information, booklets, brochures and, with her husband, Col, a travel guide to South-East Queensland. Janita was born at the end of World War II in the small New South Wales town of Barraba. Six months later, the family moved to Brisbane to live with her paternal grandfather in his sprawling Queenslander. There she spent her idle childhood. This was the time when they holidayed at Munna Point on the Noosa River, to be idle by the sea. On the river's wild northern shore stood a little old house. Its isolation made it an object of romance for the children on the southern shore and, in the end, the inspiration of this story. Janita now lives near the sea again, on lovely, salt-stung Stradbroke Island.This is her first full-length novel.

A Preview for this title is currently not available.
More Books By Janita Cunnington
View All