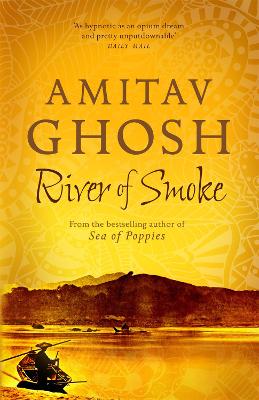 In September 1838 a storm blows up on the Indian Ocean and the Ibis, a ship carrying a consignment of convicts and indentured laborers from Calcutta to Mauritius, is caught up in the whirlwind. When the seas settle, five men have disappeared - two lascars, two convicts and one of the passengers. Did the same storm upend the fortunes of those aboard the Anahita, an opium carrier heading towards Canton? And what fate befell those aboard the Redruth, a sturdy two-masted brig heading East out of Cornwall? Was it the storm that altered their course or were the destinies of these passengers at the mercy of even more powerful forces?On the grand scale of an historical epic, River of Smoke follows its storm-tossed characters to the crowded harbors of China. There, despite efforts of the emperor to stop them, ships from Europe and India exchange their cargoes of opium for boxes of tea, silk, porcelain and silver. Among them are Bahram Modi, a wealthy Parsi opium merchant out of Bombay, his estranged half-Chinese son Ah Fatt, the orphaned Paulette and a motley collection of others whose pursuit of romance, riches and a legendary rare flower have thrown together. All struggle to cope with their losses - and for some, unimaginable freedoms - in the alleys and crowded waterways of 19th century Canton. As transporting and mesmerizing as an opiate induced dream, River of Smoke will soon be heralded as a masterpiece of twenty-first century literature.

Other Editions - River of Smoke by Amitav Ghosh 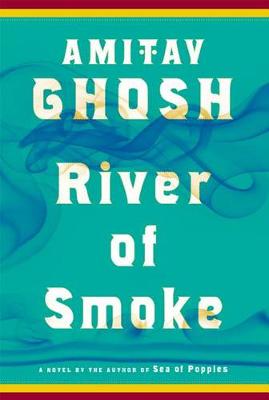 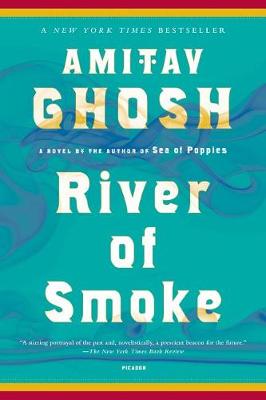 » Have you read this book? We'd like to know what you think about it - write a review about River of Smoke book by Amitav Ghosh and you'll earn 50c in Boomerang Bucks loyalty dollars (you must be a Boomerang Books Account Holder - it's free to sign up and there are great benefits!)

Book Review: River of Smoke by Amitav Ghosh - Reviewed by CloggieA (30 May 2015)

“Opium is like the wind or the tides: it is outside my power to affect its course. A man is neither good nor evil because he sails his ship upon the wind. It is his conduct towards those around him – his friends, his family, his servants – by which he must be judged. This is the creed I live by”

River of Smoke is the second book in the Ibis Trilogy by Amitav Ghosh. The story starts with an elderly Deeti Colver in Mauritius, visiting her shrine with its pictorial record of the family history. But another visitor is asked to make his not-insignificant contribution: soon the reminiscences of Neel Rattan Halder, also familiar to readers from Sea of Poppies, take over the tale. The reader learns the fate of some of the passengers of the Ibis after the storm in the Bay of Bengal, in particular, Paulette Lambert , Ah Fatt and Neel, with occasional mentions of Zachary Reid’s fate. But the majority of this book centres on Ah Fatt’s Parsi father, Seth Bahram Modi, whose opium-laden ship, the Anahita, weathers the same storm in the Bay of Bengal, en route to Canton, and on events there as the Chinese Emperor takes steps to eradicate the scourge of the opium trade on his people.

Once again, Ghosh gives the reader a tremendous amount of information: of course, opium trade features largely, but Chinese customs, trade and diplomacy, bird’s nest soup, the transport of live plants across the globe, Asian art, painted gardens and Napoleon all get a mention. And providing all this, as he does, in the context of an engaging story set against the backdrop of events leading to the First Opium War, he makes it easy to assimilate. His characters are all well-rounded: their backstories often forming interesting little tales by themselves. His (and his ancestor’s) fascination with the migration of words is apparent in the many different language forms that appear: local patois, pidgin and slang. The number of aliases that some of the characters have is another intriguing facet of this book.

As well as straight narrative, Ghosh gives the reader facts by employing the device of a newcomer’s first impressions and explanations. The letters from Robin Chinnery to Paulette, in particular, serve this purpose, as well as being a marvellous source of humour. This book, like the first, is filled with beautiful descriptive prose and insightful observations: “Nowhere on earth, I suspect, is the importance of portals as well understood as in China. In this country, gateways are not merely entrances and exits - they are tunnels between different dimensions of existence”. Another excellent read that will have fans looking forward to the third book, Flood of Fire.

Amitav Ghosh was born in Calcutta in 1956. He grew up in Bangladesh, Sri Lanka and India. He studied at the universities of Delhi and Oxford and published his first novel, The Circle of Reason in 1986. He has taught at a number of institutions, most recently Harvard, and written for many publications. He currently divides his time between Calcutta, Goa and Brooklyn. The first novel in the Ibis trilogy, Sea of Poppies, was shortlisted for the Man Booker prize.

Everything Under The Heavens: how the past helps shape China's push for global power
Howard W. French
$29.75 $35.00

Gun Island: A spellbinding, globe-trotting novel by the bestselling author of the Ibis trilogy
$28.04 $32.99