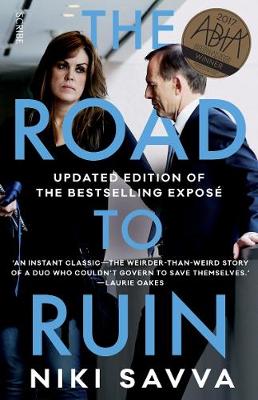 The Road to Ruin: How Tony Abbott and Peta Credlin Destroyed their own Government

Description - The Road to Ruin: How Tony Abbott and Peta Credlin Destroyed their own Government by Niki Savva

'There will be no wrecking, no undermining, and no sniping.'
-Tony Abbott, 15 September 2015

Abbott's performances in the party-room debates on education and climate change had ranged between woeful and pathetic. He sounded desperate, he was inconsistent, and -?his colleagues thought?-?slightly ridiculous. They knew he would never stop going after cheap headlines during soft interviews where he sucked up the oxygen, with revision and division as his calling cards. All they could hope was that people would soon grow tired of listening to him. Normal people might have, but the media grew more and more hysterical, as if a challenge were imminent.

In the original edition of The Road to Ruin, prominent political commentator, author, and columnist for The Australian Niki Savva revealed the ruinous behaviour of former prime minister Tony Abbott and his chief of staff, Peta Credlin. Based on her unrivalled access to their colleagues, and devastating first-person accounts of what went on behind the scenes, Savva painted an unforgettable picture of a unique duo who wielded power ruthlessly but not well.
That edition became a major bestseller, and went on to win an Australian book industry award for the best general non-fiction book of the year.

Now Savva continues where she left off. This updated edition contains a new, 13,500-word final chapter, in which Savva reveals the inner state of the Turnbull government - and the behind-the-scenes jockeying of friends and foes alike. From the mayhem of an own goal scored by Christopher Pyne, to the ramifications of Tony Abbott's ramped-up destabilisation campaign, it is, as usual, an unputdownable and impeccably sourced account.

Buy The Road to Ruin: How Tony Abbott and Peta Credlin Destroyed their own Government by Niki Savva from Australia's Online Independent Bookstore, Boomerang Books.

Other Editions - The Road to Ruin: How Tony Abbott and Peta Credlin Destroyed their own Government by Niki Savva 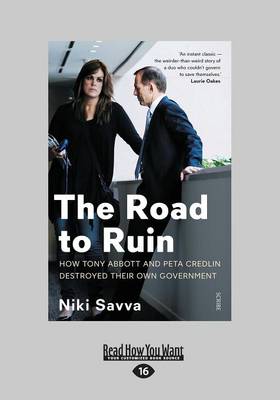 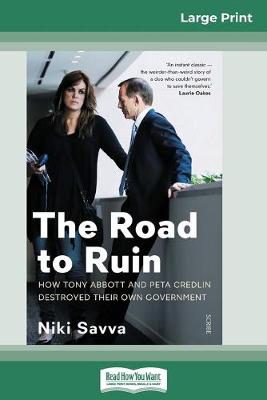 Book Reviews - The Road to Ruin: How Tony Abbott and Peta Credlin Destroyed their own Government by Niki Savva

» Have you read this book? We'd like to know what you think about it - write a review about Road to Ruin: How Tony Abbott and Peta Credlin Destroyed their own Government book by Niki Savva and you'll earn 50c in Boomerang Bucks loyalty dollars (you must be a Boomerang Books Account Holder - it's free to sign up and there are great benefits!)

Niki Savva is one of the most senior correspondents in the Canberra Press Gallery. She was twice political correspondent on The Australian, and headed up the Canberra bureaus of both The Herald Sun and The Age. When family tragedy forced a career change, she became Peter Costello's press secretary for six years and was then on John Howard's staff for three. Her work has brought her into intimate contact with the major political players of the last 35 years. She is now a regular columnist for The Australian, and often appears on ABC TV's Insiders. In March 2017, the Melbourne Press Club bestowed Niki with a lifetime achievement award for 'outstanding coverage of Australian politics as a reporter, columnist and author'. In May, The Road to Ruin won the 2016 General Nonfiction Book of the Year Award at the Australian Book Industry Awards.

A Preview for this title is currently not available.
More Books By Niki Savva
View All