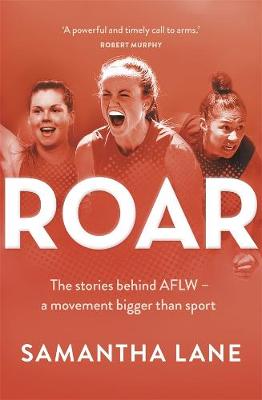 Roar: The stories behind AFLW - a movement bigger than sport

Description - Roar: The stories behind AFLW - a movement bigger than sport by Samantha Lane

'When a football ground was electrified on that unforgettable February evening, feelings did not need words. They had a sound unlike anything anyone had ever heard- an almighty, heartfelt roar.'

The inaugural season of the AFL Women's league was a game changer for Australian sport and for Australia culturally. When women joined the nation's biggest and most popular sporting code as players, it gave them licence to become legitimate football heroes. It was personal, political, proud and powerful.

With unique insights from award-winning journalist Samantha Lane, including previously untold details behind AFLW's birth, ROAR tells the remarkable tales of a group of trailblazers. These are intimate stories from a band of pioneers who now have a league of their own.

From Daisy Pearce, AFLW's original poster-player, to Craig Starcevich, the Collingwood premiership footballer who found football happiness where he least expected it, and superstars including Tayla Harris and history-making coach Bec Goddard, ROAR is a groundbreaking book to inspire, illuminate and celebrate the leading lights of AFLW.

Book Reviews - Roar: The stories behind AFLW - a movement bigger than sport by Samantha Lane

» Have you read this book? We'd like to know what you think about it - write a review about Roar: The stories behind AFLW - a movement bigger than sport book by Samantha Lane and you'll earn 50c in Boomerang Bucks loyalty dollars (you must be a Boomerang Books Account Holder - it's free to sign up and there are great benefits!)

An award-winning journalist specialising in Australian Rules Football, Olympics and cycling, Samantha Lane has been a member of Channel Seven's AFL television broadcast team since 2013. The move followed ten years on Channel 10's much-loved AFL show Before the Game. Sam's 12 years writing for The Age and Fairfax Media was highlight filled. She is a two-time Quill award winner from the Melbourne Press Club, and her work on the AFL and NRL doping scandals formed part of a Fairfax group entry that won a Walkley award. She has covered the Olympic Games and the Tour de France three times, and her work on the AFL women's league has been pioneering. She was co-host of Channel Seven's AFLW pre-match show in its inaugural season and was boundary rider for all of Channel Seven's AFLW game broadcasts, including the landmark first AFLW grand final.