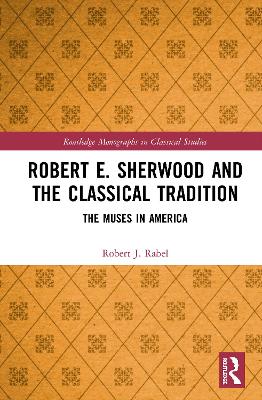 Robert E. Sherwood and the Classical Tradition: The Muses in America

Description - Robert E. Sherwood and the Classical Tradition: The Muses in America by Robert J. Rabel

This volume explores the reception of the classical past in the works of twentieth-century American dramatist Robert E. Sherwood and his use of the ancient world to critique key events and trends in American history.

It explores his comedies and the influence of both Greek Old and New Comedy, as well as his mediation of his experiences in World War I through Livy's account of the war with Carthage. During the 1930s, Sherwood used the Peloponnesian War as a template for bringing to the attention of an unaware public the danger of an impending war between the forces of democracy and the totalitarianism represented by Nazi Germany, and post-war he raised awareness of the dangers of nuclear war through the lens of the Greek gods. As well as looking at his use of the classical past in his work, since Sherwood wrote drama deeply concerned with the major social and political events of his day, his plays open windows onto the major social and political challenges facing the United States and the world from the outbreak of World War I until the beginning of the nuclear age.

This volume will be of interest to anyone working on the Classical Tradition and Classical Reception, as well as to students of twentieth-century American literature, drama, history, and politics.

» Have you read this book? We'd like to know what you think about it - write a review about Robert E. Sherwood and the Classical Tradition: The Muses in America book by Robert J. Rabel and you'll earn 50c in Boomerang Bucks loyalty dollars (you must be a Boomerang Books Account Holder - it's free to sign up and there are great benefits!)


A Preview for this title is currently not available.
More Books By Robert J. Rabel
View All