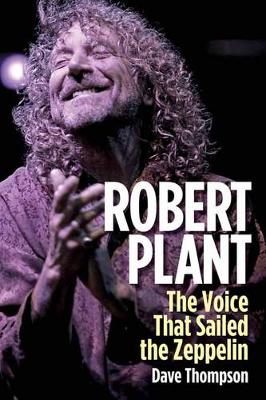 The Voice That Sailed the Zeppelin

Robert Plant: The Voice That Sailed the Zeppelin follows the iconic singer through his heights of fame with classic rock giant Led Zeppelin, his second life as a multimillion-selling solo artist, and his more idiosyncratic pursuits. A wealth of former associates lend their voices and recollections to an account that steps far beyond the tried and tested tales of Zeppelin's life and times. This all-new biography details Plant's early years as an unknown in Birmingham, with fresh depth and insight. It likewise tells the Zeppelin story from new and unexpected angles, focusing on Plant's contributions to the band's success and on the toll/effect of that success on him as a performer and an individual. After drummer John Bonham died in 1980 and Zeppelin broke up, Plant went solo two years later, in time becoming the only former band member to maintain an unbroken career to this day. His single-mindedness in meeting this challenge might well be his greatest personal attribute, enabling him to push forward without regard for his past or any related expectations. Dave Thompson shows how it is Plant's determination alone that ensured Zeppelin reunions would not become a routine part of the classic rock furniture, as he created a body of work that in so many ways artistically rivals what he recorded with the band.

» Have you read this book? We'd like to know what you think about it - write a review about Robert Plant book by Dave Thompson and you'll earn 50c in Boomerang Bucks loyalty dollars (you must be a Boomerang Books Account Holder - it's free to sign up and there are great benefits!)

DAVE THOMPSON is the author of over 100 books on rock and pop culture, including Roger Waters: The Man Behind the Wall and Hearts of Darkness: James Taylor, Jackson Browne, Cat Stevens, and the Unlikely Rise of the Singer-Songwriter, both from Backbeat Books. His writing has appeared in Rolling Stone, Spin, Goldmine, MOJO, Melody Maker, and other outlets.

A Preview for this title is currently not available.
More Books By Dave Thompson
View All

The Ultimate Guide to Vinyl and More: All You Need to Know About Collecting Essential Music from Cylinders and CDs to LPs and Tapes
$42.39 $52.99