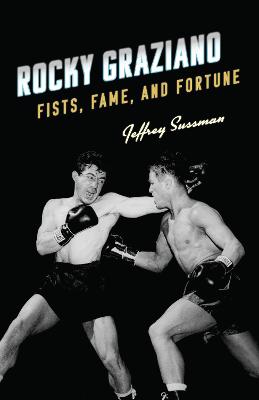 In Rocky Graziano: Fists, Fame, and Fortune, Jeffrey Sussman tells the rags-to-riches story of Tommy Rocco Barbella, who came to be known as Rocky Graziano. Raised by an abusive father, Graziano took to the streets and soon found himself in reformatories and prison cells. Drafted into the U.S. Army, Graziano went AWOL but was eventually caught, tried, and sent to prison for a year. After his release, Rocky went on to have one successful boxing match after another and quickly ascended up the pyramid of professional boxing. In one of the bloodiest battles in the history of the middleweight division, Rocky beat Tony Zale and became the middleweight champion of the world. Rocky retired from boxing after he lost his crown to Sugar Ray Robinson and went on to have a successful acting career in two acclaimed television series. Rich and famous, he was no longer the angry young man he once was. In his post-boxing life, Rocky became known for his good humor, witty remarks, and kindness and generosity to those in need.

Rocky Graziano's life is not only inspiring, it is also a story of redemption, of how boxing became the vehicle for saving a young man from a life of anger and crime and leading him into a life of happiness and honesty. The first biography of Graziano in over 60 years, this book will bring his story to a new generation of boxing fans and sports historians.

» Have you read this book? We'd like to know what you think about it - write a review about Rocky Graziano book by Jeffrey Sussman and you'll earn 50c in Boomerang Bucks loyalty dollars (you must be a Boomerang Books Account Holder - it's free to sign up and there are great benefits!)

Jeffrey Sussman is the author of twelve non-fiction books, as well as numerous articles and short stories about boxing. He is a regular writer for the premier boxing website www.boxing.com and is the author of Max Baer and Barney Ross: Jewish Heroes of Boxing (Rowman & Littlefield, 2016). Sussman is the president of a public relations and marketing firm based in New York City (www.powerpublicity.com).

A Preview for this title is currently not available.
More Books By Jeffrey Sussman
View All