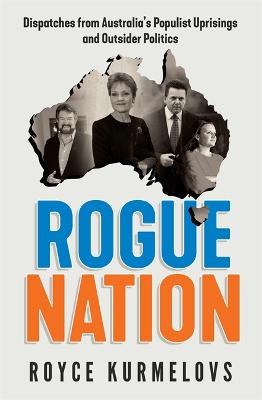 Reporting from the backrooms and corridors of Parliament House in Canberra to the streets of post-industrial Burnie in Tasmania, the struggling rural communities of Gippsland and the Queensland heartland, Royce Kurmelovs captures with perceptive, real-time analysis the rise of Australian populism.The people and places he profiles tell the story of those independent political figures who have tried to take power from the outside and those who feel abandoned by both the left and right of politics. Overshadowing it all is the controversial figure of Pauline Hanson, a woman who came back from oblivion to become a powerbroker just as the country breathlessly watched the election of Donald Trump and wondered whether the same could happen here. ROGUE NATION is essential reading for anyone who wants to know what is happening to politics in this country, and what the future might hold.

» Have you read this book? We'd like to know what you think about it - write a review about Rogue Nation book by Royce Kurmelovs and you'll earn 50c in Boomerang Bucks loyalty dollars (you must be a Boomerang Books Account Holder - it's free to sign up and there are great benefits!)

A Preview for this title is currently not available.
More Books By Royce Kurmelovs
View All