The Politics Of The Chicago City Council, 1863 To The Present

In Rogues, Rebels, and Rubber Stamps , Dick Simpson challenges and recasts current theories of Regime Politics as he chronicles the dramatic story of the civic wars in the Chicago City Council since the civil war. At the same time, the author provides a window into the broader struggle for democracy and justice. Simpson points out that through analysing city council floor fights, battles at the ballot box, and street demonstrations, one can begin to see certain patterns of conflict emerge. These patterns demonstrate that before the Great Depression, fragmented city councils were dominant. The author also discusses how since the Democrats seized control of Chicago government after the Great Depression, Rubber Stamp City Councils have been predominant, although they have been punctuated by brief eras of council wars and chaos. This book is important for anyone wanting to understand the nature of these battles as a guideline for America's future, and is well suited for courses in urban politics, affairs and history. Rogues, Rebels, and Rubber Stamps received an Honourable Mention for the 2001 Society of Midland Authors Book Award for Adult Non-Fiction.

Other Editions - Rogues, Rebels, And Rubber Stamps by Dick Simpson 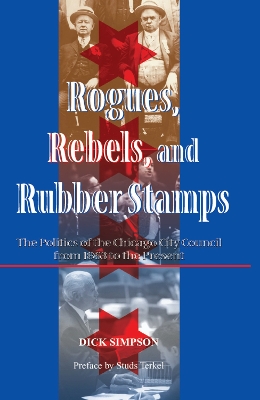 » Have you read this book? We'd like to know what you think about it - write a review about Rogues, Rebels, And Rubber Stamps book by Dick Simpson and you'll earn 50c in Boomerang Bucks loyalty dollars (you must be a Boomerang Books Account Holder - it's free to sign up and there are great benefits!)

Dick Simpson is a political science professor at the University of Illinois at Chicago. He is a former Chicago Alderman, and a former congressional candidate. He is also the author of numerous books, video documentaries, and professional journal articles on elections and urban politics.

A Preview for this title is currently not available.
More Books By Dick Simpson
View All