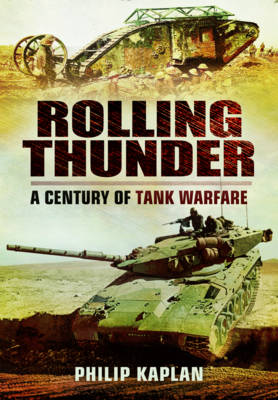 The tank is such a characteristic feature of modern warfare that its difficult to imagine a time when its presence wasn't felt on the battlefield in some form or another. Rolling Thunder, from eminent historian and author Philip Kaplan, traces the history of the vehicle from its developmental early days on the battlefields of the Great War, to modern-day uses and innovations in response to the growing demands of twenty-first century warfare. Featured in this volume are images of some of the most highly regarded and imposing types, such as the Chrysler-built Grant, the Skoda-built Hungarian Turan and the M-26 Pershing tank, employed so extensively during the Korean War. Tanks employed during the battles of Barbarossa, El Alamein, Kursk and Ardennes all feature, their histories depicted in words and images. From the battlefields of the Great War to modern-day theatres such as Iraq and Afghanistan, the history of this impressive war machine is tracked in detail. SELLING POINTS: Utilises a host of first hand accounts, employed to great effect in bringing to life the narrative history that they supplement Features a range of interesting photographs, illustrating tanks in development and in manned and active usage 16 pages of b/w plates

» Have you read this book? We'd like to know what you think about it - write a review about Rolling Thunder: A Century of Tank Warfare book by Philip Kaplan and you'll earn 50c in Boomerang Bucks loyalty dollars (you must be a Boomerang Books Account Holder - it's free to sign up and there are great benefits!)

Philip Kaplan has written several books on a host of military themed subjects. He is the author of several titles published under Pen and Swords aviation Imprint, including Behind the Wire, Mustang the Inspiration and Sailor: Battle of Britain Legend Adolph G. Malan. He is of American birth but lives in Cheltenham, UK.