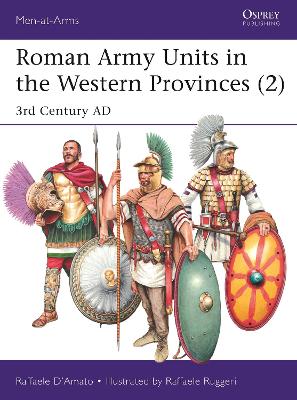 The appearance of Roman soldiers in the 3rd century AD has long been a matter of debate and uncertainty, largely thanks to the collapse of central control and perpetual civil war between the assassination of Severus Alexander in 235 and the accession of the great Diocletian in 284.

During those years no fewer than 51 men were proclaimed as emperors, some lasting only a few days. Despite this apparent chaos, however, the garrisons of the Western Provinces held together, by means of localized organization and the recruitment of 'barbarians' to fill the ranks. They still constituted an army in being when Diocletian took over and began the widespread reforms that rebuilt the Empire - though an Empire that their forefathers would hardly have recognized. Fully illustrated with specially chosen colour plates, this book reveals the uniforms, equipment and deployments of Roman soldiers in the most chaotic years of the Empire.

» Have you read this book? We'd like to know what you think about it - write a review about Roman Army Units in the Western Provinces (2): 3rd Century AD book by Raffaele D'Amato and you'll earn 50c in Boomerang Bucks loyalty dollars (you must be a Boomerang Books Account Holder - it's free to sign up and there are great benefits!)


A Preview for this title is currently not available.
More Books By Raffaele D'Amato
View All