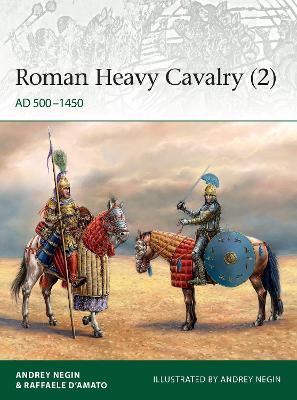 In the twilight of the Western Roman Empire in the 5th-6th centuries, the elite of the field armies was the heavy armoured cavalry - the cataphracts, clad in lamellar, scale, mail and padded fabric armour. After the fall of the West, the Greek-speaking Eastern or Byzantine Empire survived for nearly a thousand years, and cavalry remained predominant in its armies, with the heaviest armoured regiments continuing to provide the ultimate shock-force in battle.

Accounts from Muslim chroniclers show that the ironclad cataphract on his armoured horse was an awe- inspiring enemy: '...they advanced against you, iron -covered - one would have said that they advanced on horses which seemed to have no legs'. This new study, replete with stunning full-colour illustrations of the various units, offers an engaging insight into the fearsome heavy cavalry units that battled against the enemies of Rome's Eastern Empire.

» Have you read this book? We'd like to know what you think about it - write a review about Roman Heavy Cavalry (2): AD 500-1450 book by Dr Andrey Evgenevich Negin and you'll earn 50c in Boomerang Bucks loyalty dollars (you must be a Boomerang Books Account Holder - it's free to sign up and there are great benefits!)


A Preview for this title is currently not available.
More Books By Dr Andrey Evgenevich Negin
View All