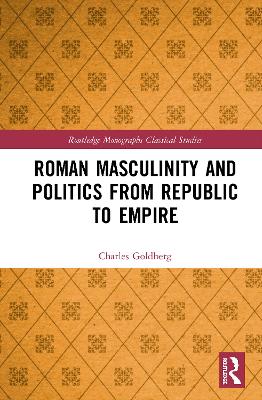 Roman Masculinity and Politics from Republic to Empire

This volume explores the role that republican political participation played in forging elite Roman masculinity. It situates familiarly "manly" traits like militarism, aggressive sexuality, and the pursuit of power within a political system based on power sharing and cooperation.

In deliberations in the Senate, at social gatherings, and on military campaign, displays of consensus with other men greased the wheels of social discourse and built elite comradery. Through literary sources and inscriptions that offer censorious or affirmative appraisal of male behavior from the Middle and Late Republic (ca. 300-31 BCE) to the Principate or Early Empire (ca. 100 CE), this book shows how the vir bonus, or "good man," the Roman persona of male aristocratic excellence, modulated imperatives for personal distinction and military and sexual violence with political cooperation and moral exemplarity. While the advent of one-man rule in the Empire transformed political power relations, ideals forged in the Republic adapted to the new climate and provided a coherent model of masculinity for emperor and senator alike. Scholars often paint a picture of Republic and Principate as distinct landscapes, but enduring ideals of male self-fashioning constitute an important continuity.

Roman Masculinity and Politics from Republic to Empire provides a fascinating insight into the intertwined nature of masculinity and political power for anyone interested in Roman political and social history, and those working on gender in the ancient world more broadly.

» Have you read this book? We'd like to know what you think about it - write a review about Roman Masculinity and Politics from Republic to Empire book by Charles Goldberg and you'll earn 50c in Boomerang Bucks loyalty dollars (you must be a Boomerang Books Account Holder - it's free to sign up and there are great benefits!)


A Preview for this title is currently not available.
More Books By Charles Goldberg
View All