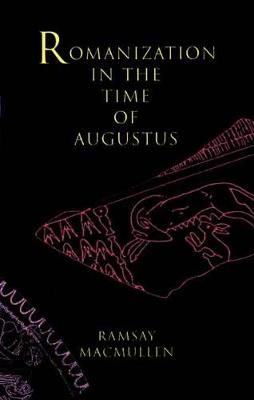 Romanization in the Time of Augustus

Description - Romanization in the Time of Augustus by Ramsay MacMullen

During the lifetime of Augustus (from 63 B.C. to A.D. 14), Roman civilization spread at a remarkable rate throughout the ancient world, influencing such areas as art and architecture, religion, law, local speech, city design, clothing, and leisure and family activities. In this vivid book, Ramsay MacMullen investigates why the adoption of Roman ways was so prevalent during this period.

Drawing largely on archaeological sources, MacMullen discovers that during this period more than half a million Roman veterans were resettled in colonies overseas, and an additional hundred or more urban centers in the provinces took on normal Italian-Roman town constitutions. Great sums of expendable wealth came into the hands of ambitious Roman and local notables, some of which was spent in establishing and advertising Roman ways. MacMullen argues that acculturation of the ancient world was due not to cultural imperialism on the part of the conquerors but to eagerness of imitation among the conquered, and that the Romans were able to respond with surprisingly effective techniques of mass production and standardization.
]]>

Book Reviews - Romanization in the Time of Augustus by Ramsay MacMullen

» Have you read this book? We'd like to know what you think about it - write a review about Romanization in the Time of Augustus book by Ramsay MacMullen and you'll earn 50c in Boomerang Bucks loyalty dollars (you must be a Boomerang Books Account Holder - it's free to sign up and there are great benefits!)

Ramsay MacMullen, Dunham Professor Emeritus of Classics and History at Yale University, is CEO of PastTimes Press and the recipient of a lifetime Award for Scholarly Distinction from the American Historical Association. He is also the author of Voting About God in Early Church Councils, Christianity and Paganism in the Fourth to Eighth Centuries, Corruption and the Decline of Rome, Paganism in the Roman Empire, and Roman Social Relations, all published by Yale University Press.

A Preview for this title is currently not available.
More Books By Ramsay MacMullen
View All