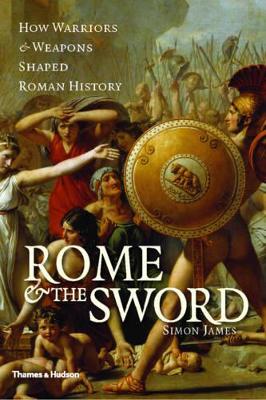 Rome and the Sword: How Warriors and Weapons Shaped AncientRome

Description - Rome and the Sword: How Warriors and Weapons Shaped AncientRome by Simon James

Today ancient Rome's army is admired either as guardian of a brilliant civilization, or reviled as a brutal instrument of imperialism. The story of Rome and the sword seems a familiar one; yet it is in fact a modern myth obscuring a very different reality. Rome's military was no 'war machine' made up of mindless cogs. There was not even an ancient term for 'the Roman Army'; rather, Romans spoke of 'the soldiers' - of men, not institutions.

The rise of Rome depended on fearsome military prowess, backed up by an unprecedented willingness to accept conquered enemies into society as Romans. This combination of 'the sword and the open hand' built one of the world's greatest empires. Yet under the emperors 'the Roman army' was far from the monolithic military machine that is generally assumed. The armies (plural) were multi-ethnic, often based far from Italy, and they established a military identity that quickly diverged from that of the civil centre. The soldiers could form well-disciplined fighting units, bearing murderously efficient weapons, but they were also habitually unruly, and could be as dangerous to their own citizens, to their emperors, or to each other, as to their enemies. Simon James brings thirty years' study of Roman history and ancient military technology, and a vivid storytelling style, to this groundbreaking new account of how warriors and weapons both forged the Roman empire and sowed the seeds of its destruction.

Book Reviews - Rome and the Sword: How Warriors and Weapons Shaped AncientRome by Simon James

» Have you read this book? We'd like to know what you think about it - write a review about Rome and the Sword: How Warriors and Weapons Shaped AncientRome book by Simon James and you'll earn 50c in Boomerang Bucks loyalty dollars (you must be a Boomerang Books Account Holder - it's free to sign up and there are great benefits!)


A Preview for this title is currently not available.
More Books By Simon James
View All

Simon's Essay on Irish Coins, and of the Currency of Foreign Monies in Ireland: With Mr. Snelling's Supplement: Also, an Aditional Plate, Containing Nineteen Coins
$92.47 $102.74