Rome: The Art of War

Description - Rome: The Art of War by Manda Scott

The Sunday Times bestselling author Manda Scott brings Ancient Rome to life in this memorable tale of treachery, espionage and violence. Perfect for fans of Simon Scarrow, Robert Harris and Conn Iggulden."Superior in almost every way...one of the most entertaining "Roman" novels I have read...Head and shoulders above the crowd" -- Simon Scarrow"Intricately woven, cleverly plotted. Miss this at your peril!" - Ben Kane "Excellent series - each book was a joy to read - final book kept you guessing right up until the end" -- ***** Reader review"A superb and exciting read, finished at 3am, and which I cannot recommend enough..." -- ***** Reader review"There's only one way in which I could say Manda Scott's work is predictable- every time I pick up a new Scott book, I can guarantee it will be new, refreshing, fascinating and totally different from anything that's gone before." -- ***** Reader review***************************************************ROME ON A KNIFE EDGE. A TRAITOR IN THE MIDST. Rome- AD69. The Year of the Four Emperors. Three Emperors have ruled in Rome this year and a fourth, Vespasian, has been named in the East.As the legions march toward civil war, Sebastos Pantera, the spy whose name means leopard, returns to Rome intent on bribery, blackmail and persuasion- whatever it takes to bring the commanders and their men to Vespasian's side.But in Rome, as he uses every skill he has ever learned of subterfuge, codes and camouflage, it becomes clear that one of those closest to him is a traitor, who will let Rome fall to destroy him.Together the two spies spin a web of deceit with Rome as the prize and death the only escape.

Other Editions - Rome: The Art of War by Manda Scott 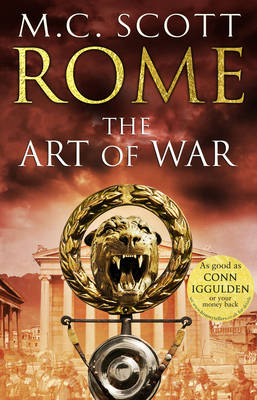 Book Reviews - Rome: The Art of War by Manda Scott

» Have you read this book? We'd like to know what you think about it - write a review about Rome: The Art of War book by Manda Scott and you'll earn 50c in Boomerang Bucks loyalty dollars (you must be a Boomerang Books Account Holder - it's free to sign up and there are great benefits!)

MC Scott taught veterinary surgery at the universities of Cambridge and Dublin before taking up a career as a novelist. Now founder and Chair of the Historical Writers' Association, the novels have been shortlisted for the Orange Prize, nominated for an Edgar Award and translated into over twenty languages. In addition to the bestselling Boudica series, Scott is the author of an acclaimed sequence of Roman novels featuring the emperor's spy, Sebastos Pantera. Visit- www.mcscott.co.uk