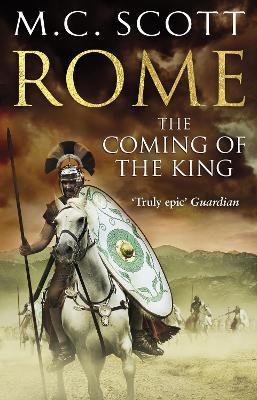 Rome: The Coming of the King

Description - Rome: The Coming of the King by Manda Scott

From the Sunday Times bestselling author Manda Scott, a high-octane, stirring and exciting historical adventure full of intrigue and action. Perfect for fans of Simon Scarrow, Robert Harris and Conn Iggulden."Intricately woven, cleverly plotted. Miss this at your peril!" -- BEN KANE"Intelligent, historical...I was bereft when I turned the final page." -- ROBERT LOW"A dazzling, wonderfully crafted tale. Spellbinding." -- GILES KRISTIAN"Manda Scott's 'Rome' is fast becoming one of my favourite series. Highly recommended." -- ***** Reader review"Definitely required reading for anyone interested in this phase of history, amongst others !!" -- ***** Reader review***********************************TO SAVE ROME HE MUST PLACE HIS TRUST IN ANOTHER. Sebastos Pantera, known to his many enemies as the Leopard and something of a lone wolf, is the spy the Emperor Nero uses only for the most challenging and important of missions. His next mission- to find the most dangerous man in Rome's empire and bring him to bloody justice.His prey is cunning, subtle and ruthless. Saulos has pledged to bring about the destruction of Rome and her provinces and now fate, good luck and planning have given him the means to do so.The brilliance of Saulos' plan will be difficult to combat, but Pantera has a new ally- a king in the making who could change the future of his people - a man he can finally trust. If they work together, they could bring a province back from the edge of ruin.But first, they must attempt the impossible; an assault on an invulnerable fortress, where failure means death to them both.The story continues in Rome- The Eagle of the Twelfth. Have you read Rome- The Emperor's Spy, where the story begins?

Book Reviews - Rome: The Coming of the King by Manda Scott

» Have you read this book? We'd like to know what you think about it - write a review about Rome: The Coming of the King book by Manda Scott and you'll earn 50c in Boomerang Bucks loyalty dollars (you must be a Boomerang Books Account Holder - it's free to sign up and there are great benefits!)

MC Scott taught veterinary surgery at the universities of Cambridge and Dublin before taking up a career as a novelist. Now founder and Chair of the Historical Writers' Association, the novels have been shortlisted for the Orange Prize, nominated for an Edgar Award and translated into over twenty languages. In addition to the bestselling Boudica series, Scott is the author of an acclaimed sequence of Roman novels featuring the emperor's spy, Sebastos Pantera. For the Historical Writers' Association, see- http-//www.TheHWA.co.uk