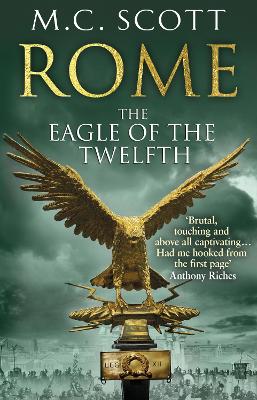 Rome: The Eagle Of The Twelfth

Description - Rome: The Eagle Of The Twelfth by Manda Scott

They are known as the Legion of the Damned...

Throughout the Roman Army, the brutal XIIth Legion is notorious for its ill fortune. For one young man, Demalion of Macedon, joining it will be a baptism of fire. And yet, amid all of the violence and savagery of his life as a legionary, he will come to love the Twelfth and the bloody-minded, dark-hearted soldiers he calls his brothers.

But during the punishing Judaean campaign, the Hebrew army inflict a catastrophic defeat upon the legion - not only decimating their ranks, but taking away their soul - the eagle.

There is just one final chance to save the legion's honour - to steal it back. To do that, Demalion and his legionnaries must go undercover into Jerusalem, into the very heart of their enemy, where discovery will mean the worst of deaths, if they are to recover their pride...

Book Reviews - Rome: The Eagle Of The Twelfth by Manda Scott

» Have you read this book? We'd like to know what you think about it - write a review about Rome: The Eagle Of The Twelfth book by Manda Scott and you'll earn 50c in Boomerang Bucks loyalty dollars (you must be a Boomerang Books Account Holder - it's free to sign up and there are great benefits!)

MC Scott taught veterinary surgery at the universities of Cambridge and Dublin before taking up a career as a novelist. Now founder and Chair of the Historical Writers' Association, the novels have been shortlisted for the Orange Prize, nominated for an Edgar Award and translated into over twenty languages. In addition to the bestselling Boudica series, Scott is the author of an acclaimed sequence of Roman novels featuring the emperor's spy, Sebastos Pantera. Visit- www.mcscott.co.uk u>